‘Paradise Lost’ & ‘Regained’ in the Caribbean 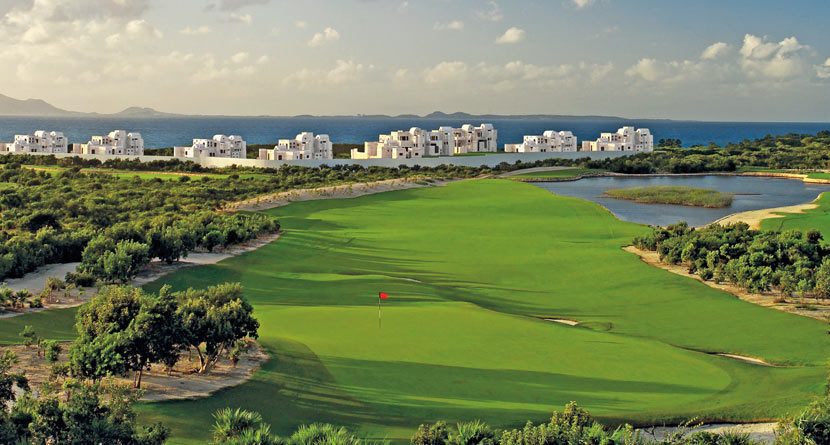 It seemed like a good idea at the time.

Temenos Anguilla, as it was known, was an ambitious resort development conceived in 2002 by entertainment mogul Robert F.X. Sillerman, whose company owned “American Idol,” a majority stake in Elvis Presley Enterprises, the marketing rights to Muhammad Ali and other valuable franchises. Sillerman, who amassed a billion-dollar fortune buying and selling media and entertainment properties, had earlier experienced success on Broadway, investing $2 million in Mel Brooks’ “The Producers“ in 1998. The show became one of the highest-grossing musicals in history.

But it’s a long way from the bright lights of the Big Apple to Anguilla, a tiny, eel-shaped Caribbean island known for its powdery white-sand beaches. Founded in 1650, Anguilla, a British overseas territory, has bespoke hotels, superb dining and gin-clear waters along with a discreet number of offshore banks. It has avoided the lure of casinos, all-inclusive resorts, duty-free shopping and other overtly commercial enterprises.

With the government’s blessing, Sillerman proposed to build the island’s first golf course, a five-star resort and an upscale community on the island’s south shore. The world was spinning a little faster in those heady days. It was a time when powerful tycoons viewed the creation of a high-end resort as a way to define their version of luxury living. There is ego gratification in the ownership of a hotel. Just ask Donald Trump.

They say the road to hell is paved with good intentions. Using as his model a trio of stunning white-washed villas he had built on the island’s north coast that each rented for $45,000 per week, Sillerman’s dream of creating a Mediterranean-themed resort along a pristine beach on Anguilla’s southwest shore would soon devolve into an odyssey that Homer himself could not have scripted. Temenos (Greek for “sanctuary”) was plagued with problems soon after construction began in 2005. A few of the planned villas and estate homes, priced from $1.4 to $13.2 million, were sold to Sillerman’s friends, including Simon Fuller, creator of “American Idol,” and Dan Brown, author of “The Da Vinci Code.” But then fuel, freight and construction-material costs rose sharply. Labor disputes pitted native Anguillans against imported workers. A St. Regis Resort, intended to wave the luxury flag as high as it could be hoisted, never got off the ground due to quarrels between the hotel’s parent company and the developer over budgetary and quality control issues.

Not all was lost, however. Greg Norman, the high-profile Aussie star who has achieved extraordinary success in various business ventures in the wake of his checkered playing career, was hired to design a golf course on an expansive site with stellar views of the azure-blue sea and the mountainous coast of St. Martin.

After a derelict hotel was torn down and a large nursery created to safeguard the island’s rare thatched palm and other native flora, Norman revived a biologically dead saltwater pond as part of his eco-friendly approach. After topsoil was stockpiled and limestone was sledge-hammered, the Shark and his design team set about chiseling holes into the marl and soft sandstone.

For a 16-mile-long, three-mile-wide atoll reputed to be pancake-flat, Anguilla has more elevation change than meets the eye. The golf course rises from sea level to 50 feet, the holes crisscrossing a central ridge cloaked in sea grape, palmetto and white cedar above Rendezvous Bay.

The first tee is a thrilling introduction to Norman’s stagecraft. Tee shots at this mid-length par 4 drop sharply to a broad fairway that leads to a slim, two-tiered green set on the edge of a rock-rimmed lagoon. Beyond the green is the sparkling sea and the rugged outline of St. Martin. Its counterpart is the 10th, a massive par 5 with a comparable view that tumbles down to a large, kidney-shaped green it shares with the par-3 second hole.

There’s 28 acres of water on the course, mostly in the form of ponds and lagoons that come into play at 13 holes. The water hazards, coupled with the sandy waste areas and steady tradewinds, combine to create a very firm test from the tips at 7,063 yards. To his credit, Norman built wide corridors, generous bail-out areas and multiple sets of forward tees for players of lesser attainment. Anchored by an impressive Mykonos-style clubhouse with sun-splashed terraces, Temenos Golf Club, based on its strategic merits and stirring views, opened to acclaim in 2006.

Alas, while the course was well-received, most of the development’s villas were unsold or half-built when Sillerman, a victim of the financial meltdown, defaulted in 2008 after spending upwards of $200 million of his own money on his pet project.

“I do feel remorseful and I do feel regret,” Sillerman, now 63, told the Wall Street Journal in 2009. “I think that I exhibited an element of hubris.”

One man’s loss is another man’s gain. This is especially true in the golf development business, where a second owner, unburdened by initial infrastructure costs, can derive a profit from an existing facility.

Operated for two years by Cap Juluca, a nearby luxury hotel, the golf club was eventually abandoned. In late 2011, the defunct property, which nature had begun to reclaim, was acquired at auction by Brooklyn native Leandro “Lee” Rizzuto, a self-made man who in 1999 had built the CuisinArt Resort on Rendezvous Bay a stone’s throw from the future Temenos project. (CuisinArt Resort is named for the kitchen-products division of Rizzuto’s Conair Corporation.) Rizzuto, a college dropout, started the company with his parents in 1959 using $100 he got from selling a Cadillac. Currently at No. 271 on the Forbes 400 list, his net worth is estimated at $1.8 billion.

Sillerman, for his part, spent $50 million to build Temenos Golf Club. Rizzuto picked up the golf course and clubhouse, along with a sizable parcel of beachfront real estate, for $16 million. In common parlance, that’s pennies on the dollar.

While not a golfer, Rizzuto understands that his new amenity requires intensive upkeep to justify its green fee of $225 for resort guests in high season. The renamed Cuisinart Golf Resort & Spa has spent millions to update the clubhouse and restore the course, repairing the desalination plant used for irrigation and ripping out weeds that had invaded the fairways.

I toured the layout while under construction with one of Norman’s designers in 2004, played the course in 2008 shortly before the plug was pulled and returned earlier this year to see how the facility was faring under new ownership. I can report that CuisinArt Golf Club is better now than when it opened. The low, thick forest framing the course has been trimmed back to enhance playability and accentuate the views. The greens, tees and fairways are in excellent shape. Neglected to bring your clubs? Titleist rentals are available. Want to kick back with a cold one after the round? The clubhouse grill, overlooking the fairways and sea, is one of the most delightful 19th holes in the islands. Don Johnson, the resort’s director of golf operations, was the club’s superintendent during the grow-in phase and has returned to oversee the layout’s resurrection. In line with the game’s trend towards firmer, faster playing surfaces that require fewer nutrients and less water, Johnson said the course has been “hardened off” and is now more sustainable.

The resort itself fronts one of the loveliest beaches in the Caribbean, a nearly two-mile stretch of pearly-white sand fronting Rendezvous Bay. The world’s only resort-affiliated hydroponic farm produces delectable vegetables and herbs, which in the hands of talented chefs is why the meals at the resort are so good. There’s also a full-service spa, free non-motorized water sports (windsurfing, anyone?) and 93 spacious rooms that overlook the sea.

Sillerman, an otherwise brilliant businessman who stepped outside his area of expertise and paid dearly for his folly, told the New York Post in 2009, “I think I have shown conclusively I’m not knowledgeable enough about the real estate business.”

His paradise is lost, but Rizzuto, a savvy opportunist, has revived a defunct seaside course and can now lay claim to one of the finest 18-hole golf resorts in the Caribbean.