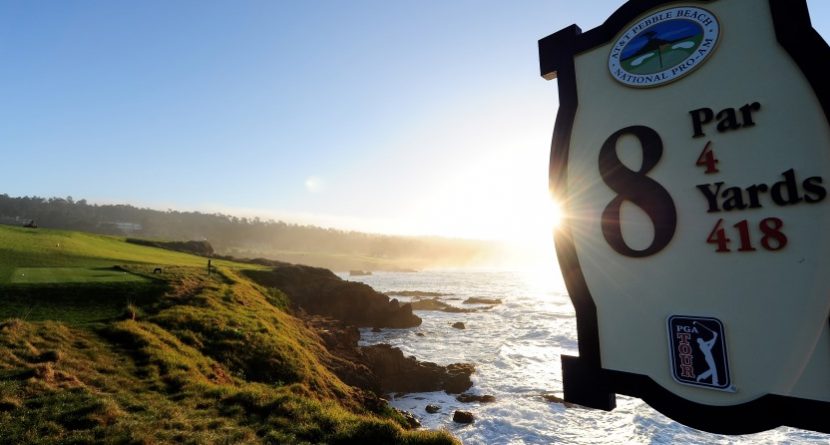 As winter weather blankets a large portion of the country, we’d like to take your mind off of the freezing rain, high winds and heavy snow.

Could there be a better distraction than thoughts of one of golf’s most hallowed grounds?

Ladies and gentleman, we present to you: Pebble Beach and the Monterey Peninsula. Contrary to popular belief, the Monterey Peninsula is not perfect for golf.

First of all, the region’s visual distractions make it virtually impossible to concentrate on anything other than, well, the visual distractions. There’s nothing like witnessing a thick fog bank dissolve several hundred feet away, revealing the crashing surf and verdant hills of Carmel. Beauty also adds to the peninsula’s persistent slow-play problem, since hitting golf shots interferes with snapping photographs, cooing at the wild deer and barking at the sea lions below.

Then there’s the fickle weather — warm sunshine, ferocious winds and torrential rain. And that’s just on one hole. Finally, there’s the cost. The Monterey Peninsula is very expensive, but absolutely worth it for the committed golfer. Besides, you’re in one of the world’s most-stunning locales, home not only to Pebble Beach, but a dense concentration of outstanding public-access — not to mention private — courses. Location, location, location.

Hey, no golfer worth his or her salt passes on an opportunity to play Pebble Beach, regardless of the $495 freight. That even goes for your short-armed cheapskate buddies who throw quarters around like manhole covers. After all, we’re talking about Pebble Beach, the 7,040-yard site of some of golf’s greatest moments, a fact that whacks you across the face on the first tee, your hands shaking uncontrollably. Neither television nor photographs do Pebble justice. The course itself is a tough-but-fair test, but you quickly discover it ain’t so easy making a swing as each hole — ones you’ve seen on TV countless times — jump to life. Concentrating on the 543-yard 18th, one of the world’s most-photographed holes, is especially tough, more so when you encounter photo-snapping foreign tourists using the famous putting surface as a picnic venue, as a trio did despite our foursome’s wild gesticulations to evacuate the premises so we could hit the green, not their skulls, with our approaches.

While The Lodge at Pebble Beach’s 161 guest rooms and suites look ordinary from the exterior, their stunning interiors are anything but. The Bench, a brand-new restaurant, specializes in wood-roasting and open-flame cooking. The famous Tap Room, a great steakhouse, is also one of the world’s most-famous 19th holes. The Lodge, built in 1919, and the more contemporary Inn at Spanish Bay each have fabulous spas, swimming pools, retail shops and superb restaurants. Pebble’s Casa Palmero — a 24-room, Mediterranean-style estate — is a resort within a resort, with unsurpassed personalized service.

Just up the road is Carmel-by-the-Sea, where house addresses, parking meters and streetlights are still banned. It’s fun browsing this cozy village’s shops and boutiques, and dining in the many restaurants along the main thoroughfare, Ocean Avenue, and side streets.

You’ll also love cruising 17-Mile Drive, arguably the world’s most-scenic byway. For $10 (free for guests of either Pebble Beach resort), the only private toll road west of the Mississippi offers numerous photo ops at scenic pullouts along the twisting, often-oceanside route. You’ll even pass just underneath ultra-exclusive Cypress Point Club’s first tee, from which tee shots soar over the road (hopefully) toward the first fairway.

The legendary road weaves around the Inn at Spanish Bay and its outstanding course, the Links at Spanish Bay. The Inn, one of the world’s top golf destinations in its own right, has 269 well-appointed rooms. Ours was 100 feet from where a bagpiper performs nightly near the second green, 30 minutes before sunset. Spanish Bay’s two restaurants include Roy’s, which serves up unbeatable ocean views and Hawaiian-fusion cuisine, and Peppoli, a superb Northern-Italian eatery. The 6,821-yard, links-style course — a Robert Trent Jones Sr., Tom Watson and Sandy Tatum collaboration — winds through tall dunes and environmentally sensitive areas, with Pacific Ocean vistas from most holes. The track eases toward the shore amid sand hills for the first nine holes, heads uphill and inland through the Del Monte Forest and along 17-Mile Drive for the next four holes before descending to a windblown shore conclusion.

Many feel the nearby Jones-designed Spyglass Hill is the peninsula’s toughest test, and with good reason. There’s no margin for error at the 6,960-yard brute, with an abundance of sand and ice plant on the first five ocean holes — Spyglass Hill’s best five holes, in my mind — and trees and water on the remaining forest holes.

The first nine holes of Pebble’s 18-hole Del Monte Golf Club were created in 1897, making Del Monte the nation’s oldest course west of the Mississippi to operate continuously in the same location since its inception. The tree-lined, 6,365-yard layout was revised and another nine added by Herbert Fowler in 1920, and since has undergone additional alterations.

Related Link: An Inside Look at Tiger Woods’ Bluejack National

Poppy Hills, carved out of mid-peninsula forest, is a Robert Trent Jones Jr. creation with a North Carolina feel. From 1991 to 2009, Poppy Hills was one of the host courses for the PGA Tour’s AT&T Pro-Am. Unfortunately, the lovely, 6,863-yard layout often gets no respect because it’s unfairly compared to its older, world-class neighbors.

Pacific Grove Golf Course, five minutes up the coast from Spanish Bay, is considered by many a “poor man’s Pebble Beach.” In reality,the Mohave Desert has better-manicured fairways, but you do get great back-nine Pacific views for a pittance compared to its ritzy competition. The 5,727-yard course’s original inland nine was designed in 1932 by Chandler Egan; the back nine was added by Jack Neville in 1960 — 44 years after he co-designed Pebble Beach — amid the rocky coast’s rugged, grass dunes and ice plant. Just north of the peninsula proper, in Seaside, are Bayonet and Black Horse, two superb courses built at the abandoned 25,000-acre Fort Ord military base. Both tracks — Bayonet was originally built for base personnel in 1953 and Black Horse opened a decade later — underwent multi-million-dollar 2008 renovations by Gene Bates that yielded outstanding, challenging layouts with spectacular Monterey Bay vistas.

Stop making excuses and start saving your pennies (OK, dollars), sharpen your concentration skills and book a trip to the Monterey Peninsula. You’ll definitely be poorer upon your return, but you’ll be richly rewarded with lifelong memories.

Upon further review, maybe the Monterey Peninsula region is perfect for golf after all.

• The Monterey Peninsula is a year-round golf haven. However, its rainy season generally runs from December through February. Temperatures are relatively moderate year-round, but even summer can be cool, especially when the fog rolls in. Typical daytime temperatures from July through October are in the high 60s to low 70s. January is the coolest month with normal temps in the mid-50s. The nearby Carmel Valley, particularly in summer, can be 15 degrees warmer than on the coast.

• The Monterey Peninsula Airport (MRY) is just 10 minutes from the Pebble Beach Resort and, if you don’t mind short turboprop-jet flights, is a great option instead of San Francisco or San Jose. Fly into Monterey and you’ll have your luggage and be in your rental car less than 10 minutes after landing. Also, don’t assume convenience comes at a higher price. My round-trip ticket from Connecticut actually cost less to fly into and out of Monterey than a round-trip ticket to and from San Francisco.