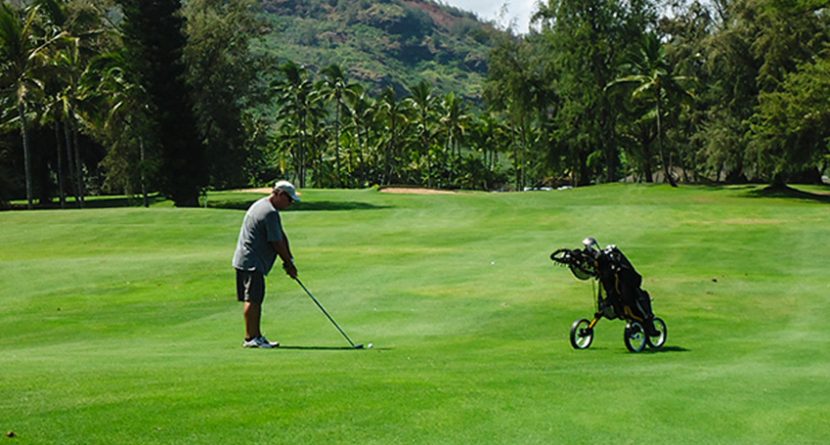 Forget the sequester. Golfers don’t need a grand bargain. What they really want is a great deal on a worthy venue, defined here as a well-groomed, well-designed course that calls for all the shots. Here are nine facilities where your greenbacks will carry as far as your best drive.

The word is out: Bandon Dunes is the greatest golf resort in the nation. But have you checked their tariffs lately? Thankfully, there’s a viable alternative to the gold-plated Bandon juggernaut and its corporate jet clientele. Priced from $45 – $55 through May, Bandon Crossings roams across a rugged, hilly site. Holes trace the contours of ancient sand dunes and burrow into a coastal forest of firs and cedars. This solid test, while not directly on the sea, delivers an unusual mix of links and parkland settings. Etched into the flanks of the Sandia Mountains 20 miles east of Albuquerque, this stunning 27-hole spread, routed on a high-desert plateau creased by arroyos, is cloaked in pinon, juniper and tall ponderosa pines. Designed by Ken Dye (no relation to Pete) and set at elevations ranging up to 7,000 feet above sea level, this bronco buster has views of five distinct mountain ranges from its elevated tees. A true Land of Enchantment for golfers, Paa-Ko Ridge is a tremendous deal through April 15, when a $59 green fee is in effect. (Rate includes golf cart and range balls).

Located 40 miles south of Montgomery, Cambrian Ridge is the sweetheart of Alabama’s Robert Trent Jones Golf Trail. Roamed by deer and wild turkey, this superlative 36-hole complex has three regulation nines plus a delightful nine-hole, par-3 Short Course. The Loblolly nine, routed through tall pines, offers a serene, Augusta National-style experience. The Canyon-Sherling combo, by contrast, is a thrilling roller-coaster ride marked by topsy-turvy greens and 200-foot drops. Cambrian Ridge is at its best in the spring, when the dogwoods and azaleas burst into bloom. Green fees start at $46 plus tax.

Since receiving a $5 million facelift in the mid-1990s, this venerable layout, built over 75 years ago by John Bredemus and site of the Houston Open from 1951 to 1963, is an oasis of urban golf set within one of the city’s most beautiful. Incongruously, glass-and-steel skyscrapers ring the perimeter of this cherished muni. With green fees for walkers ranging from $30 – $38, Memorial Park is a steal. It’s also a great place to rub elbows with the locals. Keep the wagers modest—there’s plenty of “action” available courtesy of local sharpies.

This splendid Garden Isle muni near Lihue Airport, a three-time site of the (soon to be no more) USGA Amateur Public Links Championship, is a scenic, walker-friendly layout routed across rolling terrain near the sea. Coconut palms and ironwood trees line the fairways. Non-resident weekday fee of $48 (cash or traveler’s checks only!) is a fraction of the price of the Aloha State’s better-publicized resort courses. You’ll need to being your own food and refreshments (no dining facilities), but the opportunity to tee it up with Wailua’s inimitable cast of characters is alone worth the journey. Tucked away on California’s Central Coast 30 miles north of Santa Barbara, this stunning layout, one of the state’s finest tests of pure golf, meanders across a valley floor before climbing to hilly terrain marked by huge specimen oaks and slick perched greens defended by enormous sculpted bunkers. When the Pacific breeze funnels through the Lompoc Valley, which it does most afternoons, even good players struggle on this exceptional 7,105-yard layout convenient to the charming Danish town of Solvang. Weekday rates range from $50 (walkers) to $65 (riders).

Set on the campus of Washington State University 90 minutes south of Spokane, this massive 7,308-yard layout by the late John Harbottle III, carved into a broad expanse of haystack-shaped hills, is an epic, grand-scale test with views of distant peaks in Idaho and Oregon. Swept by swirling breezes, you’ll need advanced degrees in Sound Strategy and Clever Tactics to post a good score on this bold, dramatic layout. Green fees aren’t a giveaway at $99 for non-residents (includes cart and tax), but Palouse Ridge is one of the nation’s truly outstanding college courses.

Contained within a lovely 1,152-acre park, this sturdy Robert Trent Jones, Sr. layout outside Winston-Salem and site of the 1974 PGA Championship won by Lee Trevino, is a rolling, wooded design dotted with over 150 well-placed bunkers. Tanglewood’s fairways and greens are generous in size, though the rough is usually thick and water comes into play at three holes, notably at the par-4 14th, one of the South’s finest two-shotters. Green fees at this county-owned facility, which boasts genuine championship credentials, are under $50.

Often described as the “poor man’s Pebble Beach,” this beloved municipal course, designed by Jack Neville (the man behind the original routing at Pebble), has a rather mundane front nine that is fully redeemed by a links-style back nine woven through seaside dunes adjacent to famous 17 Mile Drive. While it may not have the shot values or fantastic vistas of Pebble Beach or Spyglass Hill, the $46 weekday rate for walkers at Pacific Grove is a fraction of the price of the Monterey Peninsula’s better-known venues.