Reynolds Plantation Is Peachy Golf At Its Juiciest 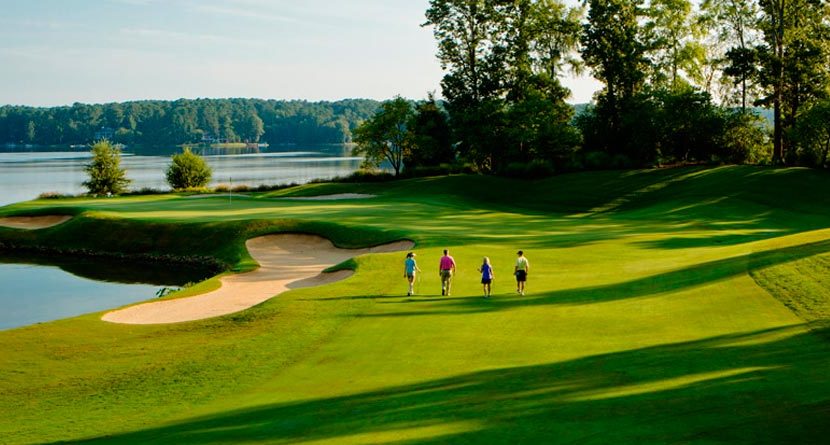 Reynolds Plantation serves up 117 holes of grand, sparkling golf with the shimmering waters of Lake Oconee often looming in the backdrop. It’s a lush, sprawling tract of gently rolling hills in Greensboro, Ga., midway between Augusta and Atlanta.

Reynolds, where caddies from Augusta National come to shoulder bags in the off-season, is a perennial fixture on the “top golf resorts in America” lists. But what makes travel golfers yearn to return once they’ve had a taste of Reynolds’ golf excesses are the extra touches that make a trip to the New South all the more peachy.

Get Fitted at the Kingdom

Get treated like a PGA Tour stud by having a TaylorMade master technician pour over data, which Trackman, Flightscope and the MAT-T system spit out, to give you a complete picture of your golf swing. Every bit of minutia is accounted for, from how the club interacts with the ground to how much the shaft bows on your downswing. They can then build sticks suited exactly to the way you play.

The experience is akin to having a fine suit made to measure in Milan — making you look as smooth as humanly possible. I’m a high-handicapper and saw dramatic results. Getting fitted with a new driver, I went from bombing slices almost 40 yards off line with my old big stick to a not-too-shabby 10-yard draw. My spin-rate also plunged by 800 rpm while my carry yardage spiked by 10 yards, and my total yardage was goosed by 25 yards.

Take stargazing to the next level when you throw chocolate, marshmallows and graham crackers into the equation. Every night at The Ritz Carlton Lodge, Reynolds Plantation the fireside S’mores concierge takes all the chores out of concocting the quintessential camp dessert, handing out pre-skewered double-mallow roasting sticks. They even lay out the crunchy exterior elements in individual portions, making assembling the gooey treat a hassle-free cinch. Keep the sugar buzz going the next morning by ordering up the S’mores Waffles at Georgia’s Bistro.

For the full Monty S’mores experience, you can have your body polished with a whipped honey graham scrub at the Ritz Carlton’s spa. This is followed by a dark chocolate skin softening serum drizzled over your pores from the neck down. After a Vichy shower rinses the S’mores Body Glow (offered seasonally) off your body, a fluffy moisturizing cream completes the human S’mores exfoliating indulgence.

Pins & Fins and out on the Lake Action

Lake Oconee is swimming in striper, hybrid bass, crappie, and catfish. Fish from the docks or venture out to find the spot where they’re biting on a pontoon or bass boat. You don’t have to know the difference between a sinker and a spinner to enjoy a relaxing float down this 19,500-acre waterway.

I took a mid-afternoon kayak trip spying great blue herons and gliding around the 18th hole of Rees Jones’ Oconee course. If you paddle really close to the green, just be wary of wayward approach shots. I was very cognizant of the fact that I made a splash just three feet shy of the dance floor so I consciously pointed my bow toward the flag in order to spot incoming spheres.

Yesterday Café is right in the heart of downtown Greensboro with black and white pictures of town luminaries lining the walls. They serve up traditional Southern grub from fried green tomatoes to po-boy sandwiches, but they’re best known for what comes after the meal, their scrumptious buttermilk pie. The sweet custardy goodness received a ringing endorsement from country superstar Carrie Underwood, who served up over 300 slices at her wedding.

The luscious pie was the second most memorable edible of my Reynolds sojourn. Top spot goes to the spot-filling and birdie inspiring Burger Dog (1/4 pound of Angus Beef amped up with mustard and sweet red cabbage relish on a hoagie), available at the grill at the turn of the Great Waters course.