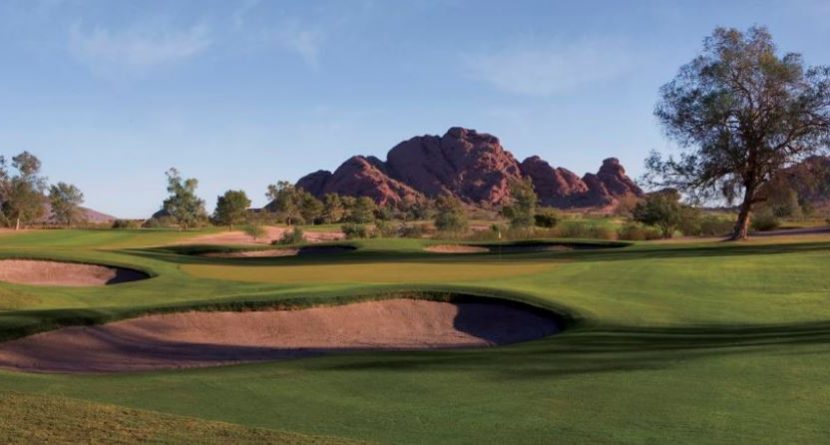 Want to tee it up and take in a spring training game in the Arizona Cactus or Florida Grapefruit leagues? For golfers who are fans of Major League Baseball, this is simply the best travel combo imaginable. Nine innings, nine choices. Batter up!

Arizona Cactus League
Phoenix, Ariz. – Oakland Athletics
How cool is this? The light poles at Phoenix Municipal Stadium, spring training home of the A’s (the team that inspired “Moneyball”), were salvaged from the legendary Polo Grounds in New York, where the Giants and Mets once played. Fun fact: Phoenix Muni is where Willie Mays hit the first spring training home run when the stadium opened in 1964.

Golf: Papago Golf Course, a muni owned by the City of Phoenix, is a walker-friendly layout that celebrated its 50th anniversary last year. Treated to a $5.8 million restoration in 2008, Papago is a former host of the U.S. Amateur Public Links Championship.

Raven Golf Club in Phoenix is convenient to the airport and a gently rolling spread framed by mature pines that emulates a parkland course in the Midwest. And Wildfire Golf Club’s two upscale courses, attached to the J.W. Marriott Desert Ridge Resort in northeast Phoenix, are both excellent. Scottsdale, Ariz. – San Francisco Giants
Scottsdale Stadium, located in the center of this trendy exurb outside Phoenix, has been the spring training home of the seven-time world champions since 1982. Don’t miss the Island Wok Noodles at the concession stand. Trolley service to the ballpark is available from several downtown locations.

TPC Scottsdale, its Stadium Course the host of the PGA Tour’s annual Waste Management Phoenix Open, presents a user-friendly test from the forward tees, though the TPC’s updated Champions Course is nearly is good at roughly half the price.

Mesa, Ariz. – Chicago Cubs
The star-crossed Cubbies played spring training games at HoHoKam Stadium in Mesa, east of Phoenix, from 1997 until last year. Now they’re at Cubs Park, a $99 million publicly funded stadium that’s also in Mesa. For the record, the pioneering Cubs were the first Major League Baseball team to make Arizona its permanent pre-season home; the storied franchise moved to the desert in 1952.

Golf: Las Sendas, a gunslinger of a course that traverses mountain foothills studded with rock formations and tall saguaros, serves up panoramic views of the Phoenix skyline and the Papago Buttes. Longbow, a relatively flat, player-friendly layout, offers a nice test and very good value. In nearby Scottsdale, Talking Stick boasts a pair of walker-friendly, lay-of-the-land courses designed by Bill Coore and Ben Crenshaw. The pristine, housing-free layouts are owned by the Salt River Pima Maricopa Indian Community. Tempe, Ariz. – Los Angeles Angels
Convenient to Phoenix Sky Harbor International Airport, Tempe Diablo Stadium seats 9,600 and is known for its Bigger Better Burger, a half-pound bacon cheeseburger. Golfers can choose to tee it up early or late in the day — most of the Angels’ spring training games start at 1:05 p.m.

Golf: ASU Karsten, a links-style design by Pete Dye and home course of the Arizona State University Sun Devils, is where Phil Mickelson sharpened his skills. Enclosed by stony peaks in nearby Fort McDowell are We-Ko-Pa’s Cholla and Saguaro courses. Owned by the Fort McDowell Yavapai Nation, these two superb layouts define the High Sonoran Desert golf experience. South of Tempe in Chandler is the Sheraton Wild Horse Pass Resort and its well-named Cattail and Devil’s Claw courses at Whirlwind Golf Club.

Golf: Innisbrook Resort in nearby Palm Harbor is home to the Copperhead, host to the PGA Tour’s Valspar Championship, but the Island Course, set among citrus groves and cypress swamps, is equally challenging.

Well worth the detour north to Brooksville is World Woods, a sprawling complex that showcases some of Tom Fazio’s finest work. Pine Barrens was sculpted from heaving sandy wastelands dotted with slash pines and gnarly shrubs. By contrast, Rolling Oaks is a refined parkland spread tunneled through a coastal hardwood forest. The massive circular Practice Park at World Woods is a ball-beater’s dream. Golf: PGA Golf Club in Port St. Lucie — “Home to the Pros, Open to the Public” — is an exceptional daily-fee facility built in the mid-1990s by the PGA of America. The club’s Tom Fazio-designed Ryder and Wanamaker courses split the difference between the Carolina Sandhills and the Florida Everglades. The Dye Course skirts a huge marsh and features all of Pete Dye’s usual visual tricks and trap doors. Tune up at the PGA Center for Golf Learning & Performance, a outstanding 35-acre instructional facility; don’t miss the PGA Museum of Golf, a showcase of the game’s history (admission is free).

Sarasota, Fla. – Baltimore Orioles
The Birds play their preseason games at Ed Smith Stadium, its recent $31.2 million renovation designed to deliver a classic ballpark feel that pays homage to Sarasota’s architectural heritage. That heritage was defined by John Ringling, the circus magnate, who built a museum to house his extensive art collection, and who persuaded John McGraw, manager of the New York Giants, to bring his team to Sarasota for spring training in the 1920s.

Golf: Tops in class is the Ritz-Carlton Members Club in nearby Bradenton, its posh Tom Fazio-designed layout parted through a lush, tropical landscape marked by oaks, wetlands and flowering shrubs. Longboat Key Club & Resort is home to the tree-lined Harbourside course, which flanks Sarasota Bay; and the more open Islandside course, bordering the Gulf of Mexico. You’ll likely see a gator or two at the Legacy at Lakewood Ranch, a links-style design that meanders through wetlands, grasslands and a maritime forest. Jupiter, Fla. – St. Louis Cardinals and Miami Marlins
Both the redbirds and the fish play their spring training games at Roger Dean Stadium, the only two-team facility in the state. The stadium’s main plaza, with its palms, flowering plants and winding walkways, is one of the prettiest on the circuit. It’s easy for kids to get autographs from pitchers in the bullpen in this intimate ballpark.

Golf: PGA National in nearby Palm Beach Gardens is a 90-hole goliath led by the Champion, a heavyweight test by Jack Nicklaus that confronts players with the “Bear Trap,” a trio of watery holes (15, 16 and 17) that gives everyone, including PGA Tour stars, the willies. PGA National’s Fazio and Palmer courses, both updated in 2012, are also recommended. North Palm Beach CC (Jack Nicklaus Signature), a muni with two holes flanking the Intracoastal Waterway and others carved into the sandy flanks of the Seminole Ridge, was completely revised in 2006 by Nicklaus, who charged the village the sum of $1 for his services.

Kissimmee, Fla. – Atlanta Braves
Based at Walt Disney World Resort, the Braves play their games at Champion Stadium inside the ESPN Wide World of Sports Complex. It’s a large, double-decked venue done up in an Art Deco and Spanish Mission style. In-game entertainment includes a four-piece brass band that plays atop the Braves dugout between innings and a roving emcee who asks randomly-selected fans trivia questions for prizes.