T-Bonz of Augusta Lives Up to the Hype 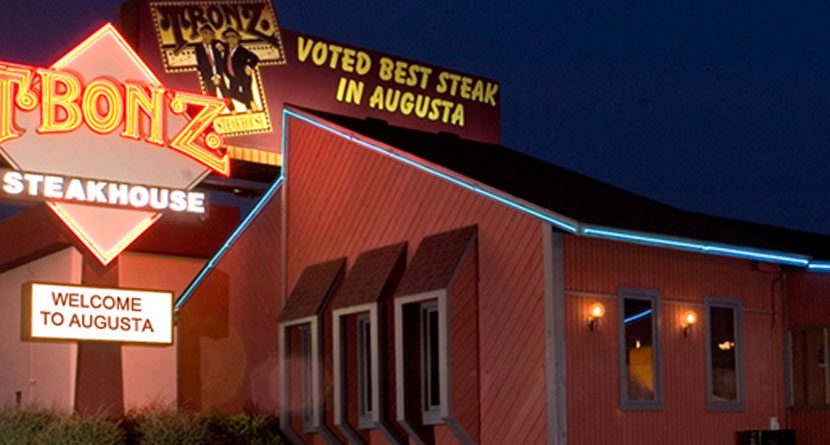 It’s no secret that the place to go in Augusta is T-Bonz on Washington Road. The place is a local legend with celebrity history dating back to James Brown and continuing today with some of golf’s greatest champions.

Last year, I found myself in town and knew that I absolutely had to get to T-Bonz, if for nothing else, to say I’ve been there. Like the pimento cheese sandwich, this place also lived up the hype.

While I wasn’t able to order one of everything on the menu, I did order the dish it’s best know for: steak.

As expected, my meal was terrific and the service was a delight. According to Suzanne Sinisgalli, Assistant General Manager of T-Bonz, that second part shouldn’t be a surprise, either.

“People from all over the world come in here and they all say, ‘Wow, your staff is incredible,’” Sinisgalli says. “Even with the volume of guests, no one waits for drinks even though they expect to.”

She added, “Our bartenders are the most professional.”

Sinisgalli also credits the kitchen staff to the experience of the customer, acknowledging that if it’s not done right, it can mess up everyone.

“I’d put our kitchen staff up against any other kitchen in Augusta,” Sinisgalli said. “Everyone here works as a team. We know one mistake can slow everyone else down and we just can’t have that.”

That in itself is quite a feat considering the amount of people T-Bonz serves. Especially during Masters week, when people from all over the world descend on Augusta for the trip of a lifetime.

Sinisgalli says that everything, from the food to the people, starts with the restaurant’s owner, Mark Cumins. Sinisgalli admits, “A lot of the people come to see Mark.”

With some of the biggest names in the world coming in for Masters week, T-Bonz has also seen its share of celebrity patrons. When asked, Sinisgalli rattled off a slew of names.

“Oh, Mark Whalberg was here the year before I got here. I hear all the girls were crazy. There have been heads of state, lots of golfers and caddies. Phil Mickelson usually comes here, Lee Westwood, Fuzzy Zoeller…”

A testament to that celebrity culture is showcased all over the walls of the restaurant. Included in the memorabilia are autographs from James Brown…

…and a flag signed by dozens of the golf’s greats and major champions.

If you’re looking for a spot in Augusta, T-Bonz is the place to be. As Sinisgalli put it, “[T-Bonz] is a culture, it’s been nurtured. Every year we try to get better and learn how keep [people] coming. It’s why we’ve been here for 27-plus years.”

And with that kind of pedigree, it’s a certainty T-Bonz will be around for years to come.