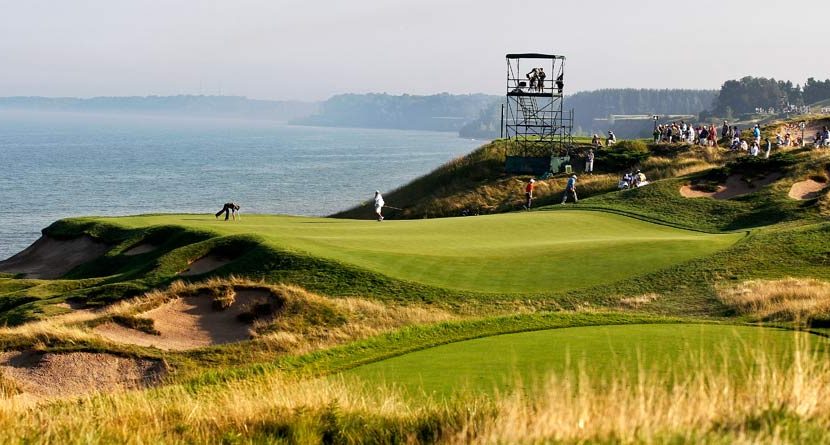 Back in the mid-90s, the only reasons to consider a trip to Wisconsin were cheese, beer, bratwurst and the Green Bay Packers — not necessarily in that order.

Well, times have changed. These days, “America’s Dairyland” is a golfer’s paradise and make no mistake — Wisconsin’s golf mecca is The American Club, one of the nation’s most-popular golf resorts and, in fact, the Midwest’s only AAA Five-Diamond Resort Hotel and one of only 57 Forbes Five-Star Resort Hotels in the world.

It doesn’t matter if you can’t differentiate between head cheese and cheeseheads. All you need to know is The American Club in tiny Kohler boasts the nation’s finest top-to-bottom collection of courses this side of Oregon’s Bandon Dunes – Whistling Straits’ Straits and Irish courses, and Blackwolf Run’s River and Meadow Valleys layouts.

That means millions of golfers worldwide have focused their collective attention on Kohler, a company village (population 2,120) located several miles west of Lake Michigan, one hour north of Milwaukee and a couple of Aaron Rodgers bombs south of Sheboygan. Kohler, one of the nation’s earliest planned garden communities, was designed by the famed Olmsted Bros., who also planned the village of Pinehurst, N.C. and New York City’s Central Park. Not only does The American Club offer superb golf, cuisine and overall service, but each well-appointed guest room features luxurious bathrooms boasting the latest Kohler fixtures and a whirlpool, which kept me happily occupied. However, I also enjoyed plenty of quality time away from my state-of-the-art bathroom. The four unique layouts were designed by Pete Dye at the request of Herbert V. Kohler Jr., whose foresight has kept his family’s plumbing-products business on top of the world and its golf resort dang near the top.

Clearly, the walking-only Straits course (caddies are mandatory), which opened in 1998 by Lake Michigan, is considered top dog. All 18 windy holes offer stunning views of the lake and golfers must navigate more than 500 bunkers, one of which might have cost Dustin Johnson the 2010 PGA Championship. Dye sculpted what was once dead-flat farmland, then a U.S. Army anti-aircraft training facility, into a heaving monster by hauling 13,126 truckloads (approximately 800,000 cubic yards) of sand from a site 10 miles away. The end product is a beautiful par-72 beast topping out at a whopping 7,790 yards from the tournament tees, with a 77.2/152 rating/slope.

The adjacent par-72 Irish course, which opened in 2000, is a tad tamer, but it’s not exactly a patsy at 7,201 yards with a stern 75.6/146 rating/slope. Dye incorporated another heavy dose of scruffy-edged pits and insidious pot bunkers; narrow landing areas; large, lightning-fast greens (averaging 7,000 square feet) that invite numerous three-jacks; many forced carries and blind shots; lakes and streams (a man-made, 10.5-acre lake affects play on the final three holes); mature trees; plenty of railroad ties and five holes with Lake Michigan views. You can walk or ride, and caddies are available.

Meanwhile, Blackwolf Run, whose 36 holes opened incrementally between 1988 and 1990, when the two final routings were opened, offers a different experience. Both courses were carved out of a glacial river valley and feature Dye’s trademark railroad-tie bunkers, Sahara-sized bunkers and rolling prairie-grass mounds. The Sheboygan River snakes seven miles through both courses, and comes into play on 14 of the River’s and two of Meadow Valleys’ holes.

Watch for fishermen casting for huge salmon and/or wayward dimpled balls in the river as you try to master the River’s stout 7,404 yards and 76.2/151 rating/slope. Don’t let your ego get the best of you, as numerous 200-yard-plus drives are needed to carry hazards and reach fairways from the rear two of the four tee markers.

Water (the river only affects Nos. 14 and 18, but wet stuff comes into play on 10 holes) is a big reason why Meadow Valleys’ rating/slope is 75.1/145 from the tips, which measure 7,250 yards. The course’s undulating fairways, huge plateau greens, massive bunkers and pot bunkers, and ever-changing winds make it a stern test. The American Club itself is, as we’ve already stressed, the foundation for this superb resort, even though golf wasn’t part of the equation for its initial 80 years. The stately Tudor-style edifice was built in 1918 as a rooming house for Kohler Co. immigrant workers by then-company president Walter J. Kohler Sr. The main building has 240 guest rooms and suites, with the Carriage House annex housing the fabulous Kohler Waters Spa.

The resort also boasts seven of the finest restaurants you’ll find anywhere, including five in The American Club and one each in the Whistling Straits and Blackwolf Run clubhouses. There are five other eateries on resort property and Whistling Straits also has a fantastic upstairs Irish pub. All the restaurants, whether fine dining or casual, offer diverse, mouthwatering cuisine.

For a mid-priced alternative to The American Club, take a 10-minute walk up Highland Drive to the Kohler-owned, 121-room Inn on Woodlake, adjacent to The Shops at Woodlake, which features more than 25 specialty shops and boutiques. And next door to The American Club is the Kohler Design Center, where it’s easy to spend a day perusing the company’s newest kitchen and bathroom display models.

Indeed, I was sad when it was time to leave this small slice of Americana. I suggest wrapping up your final day of golf with a massage, a great dinner accompanied by beverages of your choice, then a long soak in your guest room’s spacious whirlpool. Believe me, it will be a fitting ending to what will assuredly be the perfect golf trip.

The Lowdown: The American Club

• Take the three-hour Kohler Factory tour across the street from The American Club (920-457-3699 for information/reservations). You’ll learn the manufacturing processes of bathroom and kitchen fixtures on the fascinating tour, which is free of charge.

• Treat yourself to lunch or dinner at River Wildlife (800-344-2838 for reservations). Resort guests can purchase an $18 entry pass to experience an eclectic menu in the resort’s private hunting-style lodge in the woods. The pass is good for the entire length of your stay at The American Club and allows you to participate in any of the resort’s outdoor activities and pay the cost to do so.

• For information on all resort packages visit www.americanclubresort.com/packages/tac/view_all_packages_landing.html

• Blackwolf Run and Whistling Straits tee-time reservations (www.americanclubresort.com; 800-618-5535) — anytime in advance with a confirmed reservation at either of the two hotels; two calendar weeks in advance maximum for public play