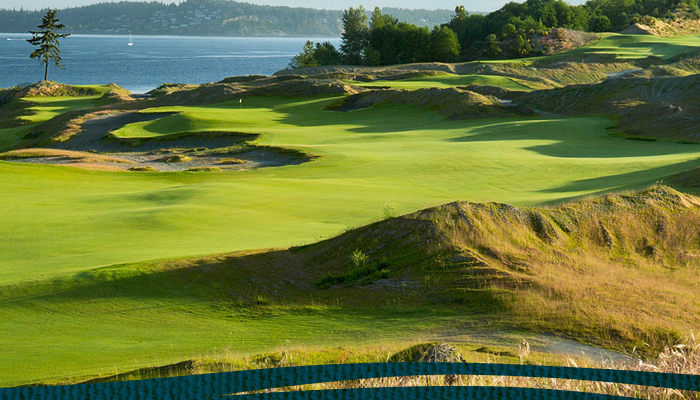 UNIVERSITY RIDGE, Wash. – While all eyes of the golf architecture world are on architect Martin Hawtree, the R&A’s Peter Dawson and the in-progress changes to St. Andrews for the 2015 Open Championship, another major championship venue for that year is also getting a controversial makeover. The gargantuan 610-yard, par-5 18th hole at Chambers Bay, Robert Trent Jones’s Pacific northwest masterpiece, is getting a new bunker – a really big one.

Meet “Chambers Basement,” a yawning chasm smack-dab in the middle of the fairway and right in the landing zone of the pros’ second shots, about 80 yards short of the green. Eleven feet deep with steep sidewalls, no one has gotten up and down from it yet and the chances of anyone doing it before the U.S. Open comes are, as Dan Jenkins would say, “slim and none.”

The bunker was actually USGA Executive Director Mike Davis’s idea. He wanted one last brain teaser for the players, so he ordered the bunker dug precisely where most second shots might land. Robert Trent Jones, the architect who designed Chambers Bay isn’t overjoyed about the new bunker, but takes an “it-is-what-it-is-attitude” about Davis’s addition.

“I think it’s out of character for the rest of the course. No other bunkers are so deep and nor should they be, it’s too deep for the average player,” explained Jones, who believes the bunker will remain after the 2015 Open, but will be significantly more shallow, maybe 5-7 feet deep.

“When people go in that bunker, they disappear!” he said while chuckling out loud.

“It’s so deep, they vanish! You see the flash of light off the shaft when they take the club back and some sand when they follow through. You might even see a golf ball, if they’re lucky,” he quipped puckishly.

Nevertheless, there is something exciting about playing a shot from an “impossible” bunker. Many golfers from around the world that come to Chambers Bay drop a ball in the bunker just to see if they’re up to the challenge.

“I wouldn’t like to play out bunkers that deep every day, but it was really fun trying it while I was here,” said golfer Rob Stewart, who traveled all the way from Texas to play a future U.S. Open venue. “Not only that bunker, but the entire course is a once in a lifetime experience. I can’t wait to come back for the Open. It should be fantastic!”

“We’re going to learn whether the best players can think on their feet when they play this course,” agreed Jones. “There are so many defenses to this golf course without the need for obvious things like trees or water. At Chambers Bay the defenses are all on the grounds – meaning all the swales and hollows and ground contours that make the ball run off in all directions.”

Jones is right: The randomness of the bounces you get at Chambers Bay makes it play like the true links it’s intended to be. You have to study the terrain and make sure to play your shot to a place where the grounds contours will filter the ball where you want it to finish.

“You have to be especially careful greenside,” Jones added, referring to the dangerous trench bunkers or fiendishly tricky greenside hollows which will send balls scurrying into perdition. Players will have more options around the greens – pitch and check, bump and run, lob wedge, even putting – but there will be premium on great scrambling at Chambers Bay for the 2015 Open, which is something the U.S.G.A. has been looking to infuse back into the tournament since Mike Davis became Tournament Director back in 2005. Davis first saw the proposed land for Chambers Bay on the same day Jones did.

“We both fell in love with the property within minutes: the water, the sand, and the open expanse gave it great possibilities for a potential U.S. Open venue…..After seeing the finished product, I knew we had a home run for our first U.S. Open in the Pacific Northwest in exactly 120 years,” he said.