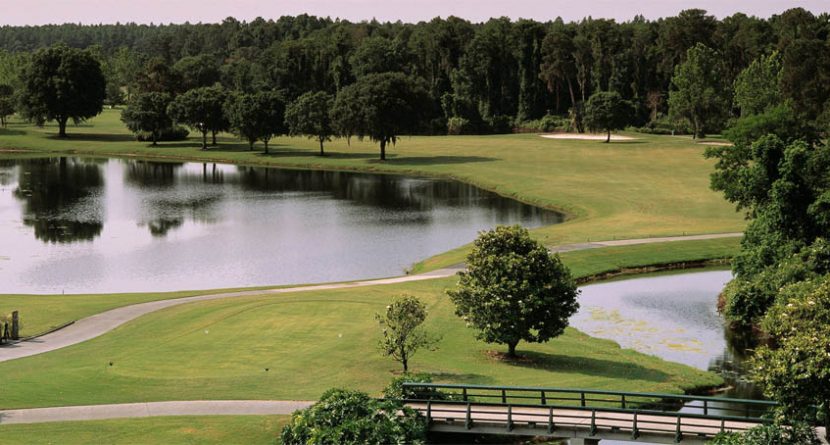 Hey there, hi there, ho there — children don’t have sole dibs on the fun at Walt Disney World, which is truly an unsung mecca for big kids. Call me goofy, but I’d bet 99 percent of today’s adults haven’t outgrown our love for Disney — even if our busy daily schedules don’t allow time to show it.

Well, it’s time to make time. It’s amazing what a trip to Disney, 22 miles southwest of Orlando, will do for the grown-up soul. Take, for instance, the 30-ish wheeler-dealer type barking into his cell phone at Disney’s Animal Kingdom during our visit. The loud conversation drew incredulous stares, but nobody blinked at the Mickey Mouse ears atop his head.

Just how popular is Disney among big folks? Well, some 1,800 couples are married annually at Disney, which also remains one of the nation’s most-popular honeymoon destinations.

OK, what does all this have to do with golf? The answer is 81 holes that are anything but Mickey Mouse. Since 1971, Disney has hosted the PGA Tour’s annual Children’s Miracle Network Hospitals Classic at the resort’s oldest courses — the Joe Lee-designed Palm and Magnolia. Lee’s third Disney layout, Lake Buena Vista, also was used through 1997.

Lee routed the trio through woodlands and around plenty of water and bunkers. Chances are your most vivid memories of Palm (6,961 yards) and Magnolia (7,488 yards) will be the length and precision necessary to score, so load up on balls. I’d suggest saving the Palm course for the afternoon and, if you blow a good round by butchering the 454-yard 18th as badly as yours truly, follow my lead and beeline to one of Disney’s many fine drinking establishments for a few cold ones. Magnolia, like Palm, will give you the Steamboat Willies (Mickey’s original name) if you’re hitting it sideways. Despite many solid holes, the most unforgettable is Magnolia’s 195-yard sixth, with its famous signature Mickey Mouse-shaped green-front bunker. Naturally, my ball found the mouse trap, but I made par from his right ear.

Lake Buena Vista, at 6,745 yards from the tips, is shorter and more forgiving than Palm and Magnolia, but no less demanding. Water’s a factor on 11 holes on LBV, one of but a few courses to have hosted a PGA Tour, LPGA and U.S. Golf Association event.

Disney’s youngest track — the Tom-Fazio designed Osprey Ridge — is justifiably regarded as the resort’s top dog, even though it doesn’t host the tour event because of limited gallery access and a ninth hole that doesn’t return to the clubhouse. Opened in 1992, the 7,101-yard track offers the most variety, challenge and scenic beauty of Disney’s golf portfolio. And while Osprey Ridge poses a stern test for all ability levels, it features wider fairways and more strategic tee-box settings than Palm and Magnolia. Once in the fairway, the fun begins.

Atlanta Brave course sightings are also common in February or March, since the team plays its spring-training games at the 7,500-seat park in ESPN’s Wide World of Sports Complex.

Options like that set Disney apart from any other golf resort. In fact, not only does great golf generally take a back seat, but there’s actually far more to Disney World than even its four major, world-famous theme parks — the Magic Kingdom, Epcot, MGM Studios and Animal Kingdom — and Blizzard Beach and Typhoon Lagoon water parks.

One of the must-see Disney attractions is Cirque du Soleil’s incredible, high-energy “La Nouba,” after which you’ll leave muttering, “How the hell did they do that?” The theatre is at the far western end of Downtown Disney West Side, a lively entertainment and dining promenade that connects with Downtown Disney Pleasure Island and Downtown Disney Marketplace. An end-to-end stroll will do your body good — although your wallet might suffer — after a long day on the links. West Side includes the House of Blues, Wolfgang Puck Café, Gloria Estefan’s Bongos Cuban Café and Planet Hollywood.

Farther down Lake Buena Vista Drive, and a short walk from Epcot, is another entertainment district, Disney’s BoardWalk. Strolling along the Atlantic City-style boardwalk you can partake of typical ballpark grub and drink at the ESPN Club while watching one of more than 100 TV monitors, including in the bathrooms. Stop by the Big River Grille & Brewing Works and sample one, or all five, of its micro-brewed beers. Yes, I can vouch they’re all outstanding but, in my defense, how can I write an article without some serious research?

Yes, Walt Disney World is the perfect place to temporarily ditch the rat race. And while your original reason for visiting might be to play golf and accompany the kids to the parks, we guarantee that before heading home you’ll plead with your brood to let you ride Thunder Mountain Railroad “just one more time.” We also promise during your vacation not one fellow tourist will laugh at your Mickey headwear — just leave the cell phone at home.

• Walt Disney World has 28 on-site resorts, ranging in price from $44-plus per night at Disney’s Campsites to $275-plus for one of Disney’s Deluxe Villa Resorts. Staying on-site allows you to use Disney’s complimentary transportation system. If you don’t plan to leave the park (which is easy to do since, at 47 square miles, Disney is twice the size of Manhattan), you won’t need a rental car. Buses connect each hotel with every park and attraction, at about every 15 minutes. And continual monorail service features three separate beams that travel throughout WDW, and Downtown Disney is accessible by ferryboat.

• All major airlines fly to Orlando International Airport (MCO), where you can rent a car for the 30-minute ride, or guests of select WDW hotels can utilize complimentary airport transportation to and from the resort.

• Disney restaurants priority seating (http://disneyworld.disney.go.com; 407-939-3463 — resort guests up to 60 days in advance, Hoop-De-Doo-Revue up to two years in advance)