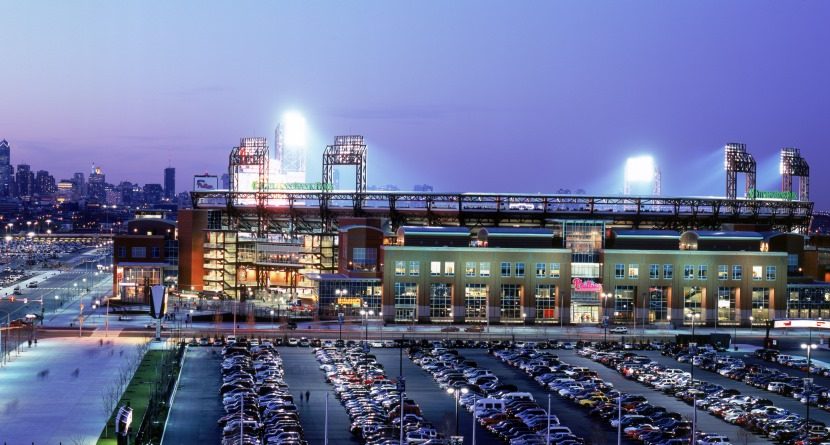 This intersection in South Philly is a must-stop for any sports fan venturing through Philadelphia. The South Philadelphia Sports Complex is one of the few sites in America – maybe the only one? – that houses each of its city’s four major professional teams.

The Wells Fargo Center – home of the NBA’s 76ers and NHL’s Flyers – is immediately to the east of Broad Street. Lincoln Financial Field – home of the NFL’s Eagles – sits about 250 yards further east, just north of Interstate 95. And about 350 yards north of “The Linc” is Citizens Bank Park – home of MLB’s Phillies (pictured above).

Philly sports fans have been flocking to Broad Street and Pattison Avenue since 1936, when the three-year-old Eagles franchise moved into what was then known as Philadelphia Municipal Stadium. The Eagles stayed four years, played elsewhere in 1940, returned in ’41, then didn’t come back to South Philly until Veterans Stadium was built 30 years later. The Phillies joined them that same year. “The Vet” popped up across Pattison Avenue from The Spectrum, which opened its doors in 1967 for the 76ers and Flyers.

But the demand for jazzed-up sports facilities hit Philadelphia in the mid-90’s, and the Wells Fargo Center (originally called the CoreStates Center) opened 1996. It was built where the old Municipal Stadium (later renamed John F. Kennedy Stadium) once stood, south of The Spectrum. Lincoln Financial Field was then erected in 2003, and Citizen’s Bank Park followed the next year.

As you can imagine, lots of parking lots would be needed for three major sports structures all within a par-5 of each other, and that’s exactly what became of Veterans Stadium and The Spectrum. Still, this square mile of land has so many stories to tell.