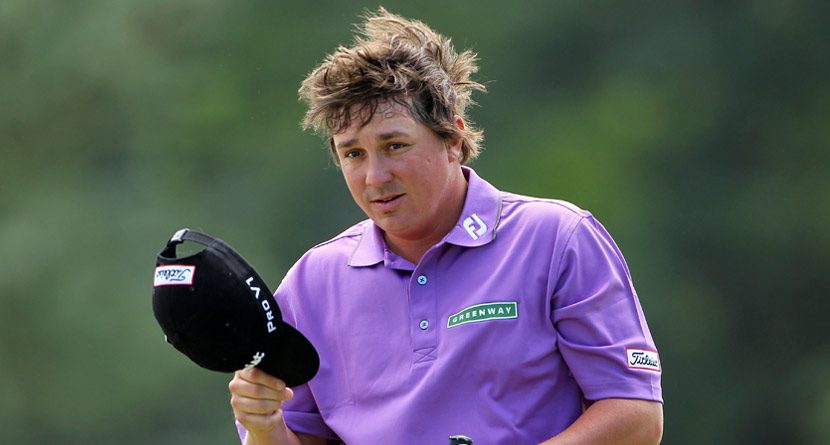 Golden Bear
In his heyday, Jack Nicklaus boasted an enviable blonde mane and a good-sized frame. And because he played an aggressive style of golf, he was coined “The Golden Bear.” These days, that nickname is the inspiration behind Nicklaus’ personal logo. Lefty
With one of the sweetest left-handed swings in golf, Phil Mickelson has long been called “Lefty.” That certainly applies to his golf, but not anything else in his life. Mickelson is right-handed in everything else. Lumpy
We pick on Tim Herron quite a bit here. Sorry, Tim. We still love ya. And, unlike our choice to have you play center for the Pittsburgh Steelers, we can’t claim responsibility for coming up with your nickname. As the story goes, Herron’s fellow tour players came up with the moniker because of his misshapen body type. Herron embraced it, even writing an advice column called “Dear Lumpy.” Mechanic
Miguel Angel Jimenez is a lover of cars (and cigars and wine and stretching) and briefly worked at an auto service shop. Yet, due to his eccentric tastes, he’s now commonly being called “The Most Interesting Man in the World.” Mrs. Doubtfire
Another classic. Colin Montgomerie, the Scottish golfer who could never quite win a tournament on U.S. soil, bears a striking resemblance to Mrs. Doubtfire — the cross-dressing character played by Robin Williams in the movie with the same name. Not that anyone’s saying Monty (see, there’s another nickname) likes to dress in old women’s clothing, but there is a definite similarity in looks. That’s it. The Shark
Greg Norman obtained the “Great White Shark” nickname by a newspaper reporter during the 1981 Masters. Over time, it’s been shortened to “The Shark.” How do you obtain this information? You hop on to Norman’s website: Shark.com. Walrus
This one is obvious. Craig Stadler really does look like a walrus; doesn’t he? There’s really not much more to say.