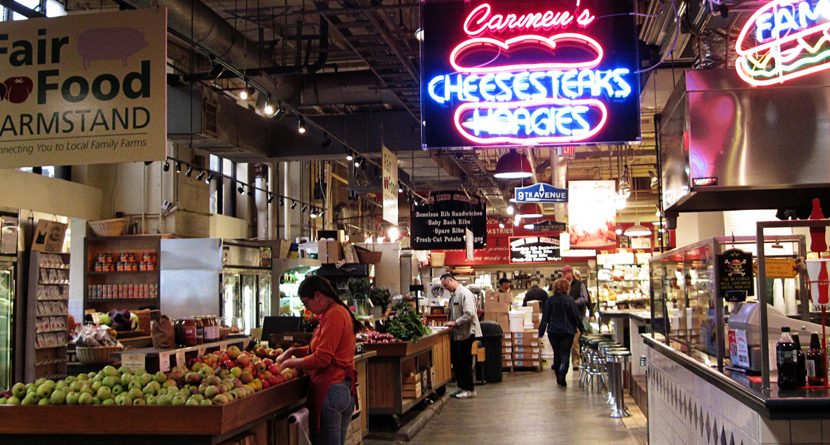 Do you like fresh produce, meat, seafood, ice cream, baked goods and other such gems?

Of course you do. Who doesn’t appreciate locally grown Brussels sprouts or slabs of beef from pastures near your house?

If you live in Philadelphia, you’re no doubt familiar with Reading Terminal Market. For those of you that are not from the City of Brotherly Love, keep reading. It’s a place that needs to be on your agenda when you visit this southeastern Pennsylvania city.

The market is not unlike its counterparts in Boston (Faneuil Hall), New York (Grand Central Market) and Washington, D.C. (Eastern Market). All offer everything from local produce, meats and cheese to coffee and baked goods. In Philadelphia, there are also restaurants and shops that sell things like cookbooks (Cookbook Stall) and shea butter (Terralyn – Bath, Body, Spirit).

And of course there’s an option to buy a cheesesteak.

Basically it’s a one-stop-shopping type of place. And it’s right in the heart of Philadelphia’s downtown.

This description on the market’s website sums it up nicely:

Mouth-watering aromas. Produce fresh from the field. Amish specialties. Fresh meats, seafood, and poultry. Unique, hand-made pottery, jewelry and crafts from around the world. The hustle and bustle of a multitude of diverse people. It’s all here in Philadelphia’s historic farmers market, Reading Terminal Market. An exhilarating selection of baked goods, meats, poultry, seafood, produce, flowers, ethnic foods, cookware and eclectic restaurants are peppered throughout the Market. We invite you to explore this unique and extraordinary historic farmers market in Center City Philadelphia. On the floors above the market, trains would come in and out of Reading Terminal for decades. The station was moved underground in 1984, so trains now flow through the area below the market — now called Market East Station. The original market opened in 1892 and was expanded over time.

The market, which at the moment has zero vacancy, is open seven days a week except for its few Pennsylvania Dutch merchants, which are closed Sunday-Tuesday.

The market is very much a part of — and a showcase of — the region’s culture. It’s even included on lists of the city’s tourist destinations that also suggest visiting the Liberty Bell and Independence Hall.

So you see, Reading Terminal Market is not just a place to buy food, drinks and gifts. It’s a place rich in Philadelphia history that displays that nostalgia every day.

Next Page: The Legion of Doom