#30DaysofPhilly: The Legion of Doom 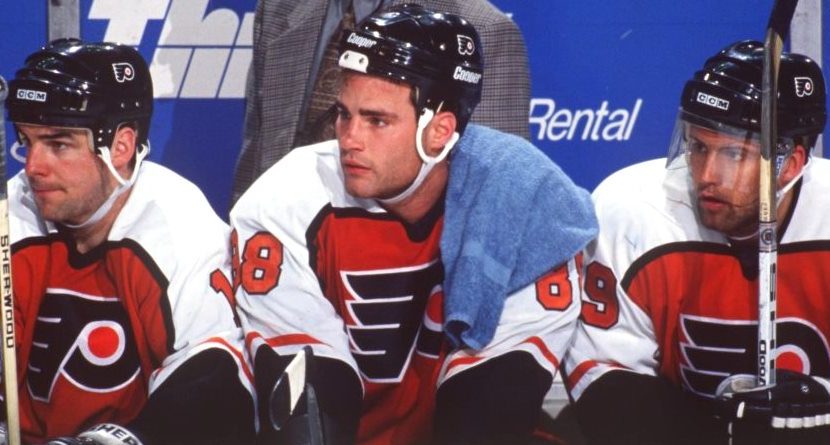 Mention “Legion of Doom” to your average bystander and they’re likely to recall childhood memories of watching an animated group of supervillains – led by Lex Luthor – on TV.

Or they’ll tell you about “Hawk” and “Animal,” two intimidating wrestlers who sported face paint and spiked shoulder pads in the World Wrestling Federation.

But ask a Philadelphian about the Legion of Doom and they’ll reminisce about one of the greatest lines the game of hockey has ever seen. They’ll rave about the Flyers’ Eric Lindros, John LeClair and Mikael Renberg.

The three forwards became teammates early in the 1995 lockout-shortened NHL season, when the Flyers’ front office desperately tried to turn its team into a contender after a 2-5-1 start. To the surprise of many, Philadelphia traded young superstar Mark Recchi for three not-as-proven players. Yet, one turned out to be a star: LeClair, who blossomed on a front line with Lindros, a 1994 All-Star, and Renberg, a rookie sensation the year prior.

In his third game with the new top line, LeClair notched his first goal for Philadelphia in a win over New Jersey. The left winger put up a hat trick two games later, with Renberg adding two goals in another Flyers victory. Four games after that, LeClair scored three more times, Renberg contributed three assists, and Lindros chipped in with two assists.

And it wasn’t just the scoring that took the league by notice. The line’s physical play and ability to maintain possession were just as crucial to its success. That overall dominance is what led Flyers teammate Jim Montgomery to say, “They look like the Legion of Doom out there.”

It’s unclear whether he was referring to the cartoon villains or the pro wrestlers, but the point was taken. And the name stuck, especially after Flyers announcer Gene Hart began referencing the Legion of Doom during his broadcasts. Behind their three top scorers (Lindros, Renberg, then LeClair), the Flyers went on to win the Atlantic Division, making a playoff appearance for the first time since 1989. They knocked off Buffalo in the first round and swept the N.Y. Rangers in the second before falling to New Jersey in the Eastern Conference Finals.

Philadelphia won the Atlantic Division again in 1995-96, but this time was ousted in the conference semifinals. Lindros once more led the team in points, but LeClair’s 51 goals were tops. Renberg missed significant time due to injury.

That would be the case for Lindros in 1996-97, but he still ended up second on the team in points behind LeClair, who tied for third in the league with 50 goals. Lindros was healthy for the playoffs, though, and the Legion of Doom carried the Flyers to the Stanley Cup Finals for the first time in 10 years. They would not win a game in that series, however, as Detroit prevailed in four.

And with that came the end of the Legion of Doom, as Renberg was traded later in the summer of 1997. But it did not mark the end of Philadelphia as a hockey town. The franchise has missed the playoffs only once since Lindros, LeClair and Renberg joined forces.

Those three years with those three players – who recorded 666 points and 305 goals in their time together – are something no Philly sports fan will soon forget.