5 Guys to Watch this Weekend at The Open Championship 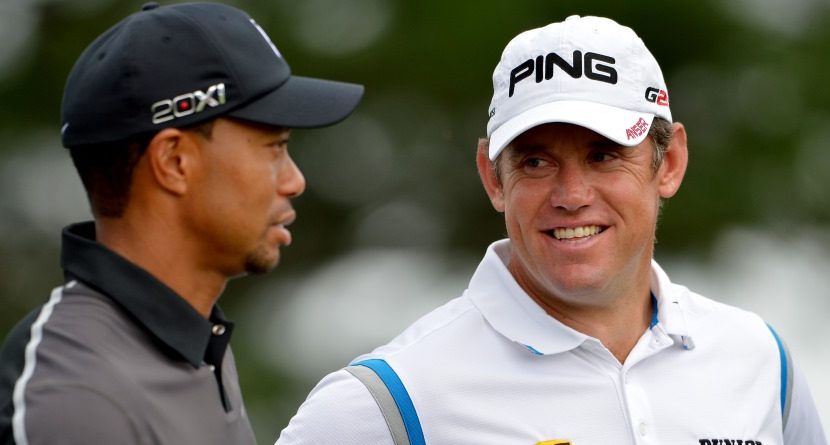 Tiger Woods is in contention, Rory McIlroy never was, and Miguel Angel Jimenez is the outright leader at 3-under. Should be an interesting weekend at the 142nd Open Championship in Scotland.

Here are five guys to keep an eye on – not including Jimenez, because that’s obvious, and here’s all you need to know about him – and five guys you won’t be able to watch:

1) Tiger Woods – He’s a pretty obvious pick as well, but we can’t ignore the top-ranked golfer in the world. He’s one shot back of the lead, his best position going into the weekend at a major since last year’s PGA Championship, when he was tied for the lead after two rounds. Woods is seeking his 15th career major and first in five years. Yet, recent history is not on his side: At the past six major championships, he scored 19 over par in the last two rounds, compared to 11 under through the first two.

2) Lee Westwood – Right there with Woods at -2 is Westwood, the Englishman who’s never won a major in 61 previous appearances. After a 1-over round Thursday, the 40-year-old carded a 3-under 68 on Friday, the best score of the day. Surely the British crowd will be pulling for a British man, especially one who’s come so close so many times – 15 top-10s at majors, including second place at the 2010 Open Championship and Masters.

3) Martin Laird – Or would the Scottish fans rather see a Scottish winner? Laird, a Glasgow native and Colorado State University grad, is two shots back of the lead at 1-under. Should he prevail, he’d win his first major and become the first Scottish man to win the Open Championship in Scotland since Tommy Armour in 1931 at Carnoustie. Sandy Lyle was the last Scot to win the Open, but his 1985 title came at Royal St. George’s in England.

4) Adam Scott – The reigning Masters champ matched four birdies with four bogeys Thursday, but evened out Friday. Though his second round was 1-over, Scott played extremely solid with 10 straight pars on holes 7 through 16. He then birdied the par-5 17th and closed the round with another par. Very few guys played the back nine under par on Friday.

5) Shiv Kapur – He was all the rage Thursday following an opening-round 68, after which we wrote, “As long as he doesn’t go kaput, Kapur is in good position to record the best Open performance ever by an Indian.” Well, he went kaput. Kapur carded a 6-over 77 on Friday and is six shots back. But he is tied for 24th, so he could still better the 27th-place finish that countryman Jyoti Randhawa achieved in 2004.

Five guys we won’t be able to watch:
1) Rory McIlroy – Wow. Just wow. At least his 75 on Friday was better than the 79 on Thursday.

3) Luke Donald – Our fit Brit couldn’t recover from an opening-round 80.