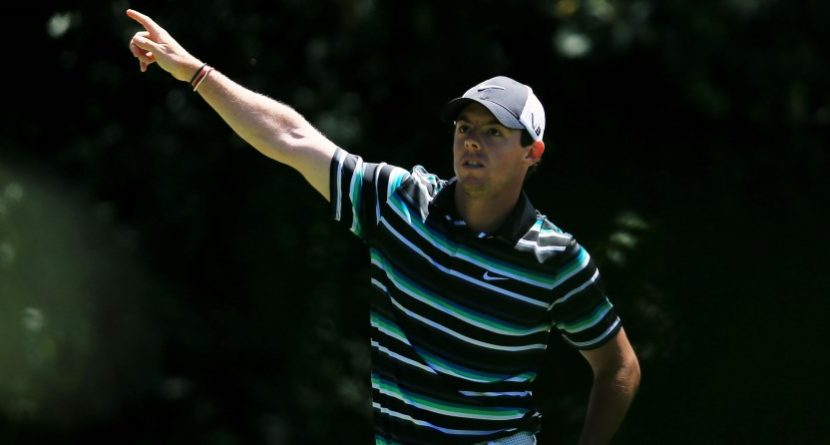 Jim Furyk scooted his way up the board to take the lead going into Sunday at the PGA Championship, seeking his first major since the 2003 U.S. Open. He shot a 2-under-par 68 Saturday and sits one stroke ahead of Friday’s leader, Jason Dufner.

Despite a double-bogey on No. 5, Dufner rebounded Saturday to stay on pace, and after a par-saving putt on 18 – which caught the very back edge of the cup and rolled in – he’ll be in the final pairing Sunday.

Those are your two leaders, but they weren’t among the biggest surprises to come out of Saturday. These five guys were, for better or worse:

Rory McIlroy
He was done, finished, distracted and incapable of winning a major this year. But the defending PGA champ stayed even through two rounds, then turned it on for a 3-under 67 Saturday to hop into seventh place with Lee Westwood. He’s still six shots back of the lead, but if he can carry over the momentum gained from the end of his third round, who knows? McIlroy birdied 17 (with a 50-foot putt) and 18 (via a chip in), which have played as the toughest holes of the tournament.

Jonas Blixt
Out of nowhere, Sweden’s Jonas Blixt shot up the board with a bogeyless 4-under 66, which is apt because his surname means “lightning” in Swedish. And the birdie he collected on 18 came after his drive landed in a fan’s pocket. Seriously. Three shots back of the lead, Blixt will be with fellow Swede Henrik Stenson on Sunday.

Dustin Johnson
The round of the day, however, went to Dustin Johnson and his 5-under 65. Paulina Gretzky’s boyfriend jumped from T-60 to T-9. He’s seven shots off the lead, but another day like Saturday could do the trick.

Phil Mickelson
One of the favorites coming into the week, Mickelson played himself out of contention with +1 days on Thursday and Friday. Then everything fell apart Saturday. Lefty shot an 8-over 78 to tie his worst score in a PGA Championship (he also carded 78 in 2002’s third round). The only player who had a worse day was Gary Woodland, who six short days ago won the Reno-Tahoe Open.

Justin Rose
The reigning U.S. Open champ turned in nearly as poor a performance as Mickelson, the reigning Open Championship winner. Rose began the day in fifth place at 6-under, but a 7-over 77 took him right out of any Player of the Year discussion, which he could have won had he collected a second major this season. Now, only Adam Scott, the Masters champ, can earn a second 2013 major; he’s four shots back of Furyk at 5-under.

Other Hot Links:
– Major Win Would Be Major For These Guys
– The 9: Tiger’s Parental Guidance
– Ian Poulter on Garbage Plates & Fashion