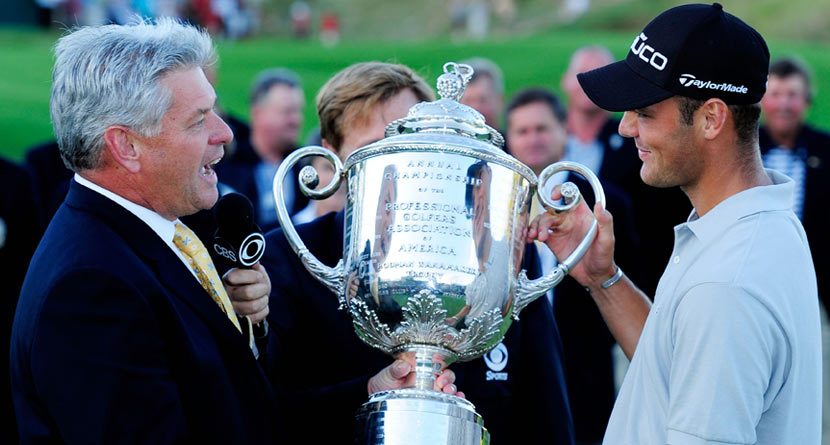 As the first New England PGA Section member to ever ascend to the Association’s highest office, Jim Remy was elected in 2008 as the 36th PGA President. During his term, Remy led in promoting the essential role PGA members play throughout the industry, especially as a golf employer’s most valuable asset for economic growth and development. Remy also campaigned for improving the general public’s perception of the fitness and healthy lifestyle values of the game of golf.

The PGA of America is the world’s largest working sports organization, comprised of 27,000 men and women golf Professionals who are the recognized experts in growing, teaching and managing the game of golf, while serving millions of people throughout its 41 PGA Sections nationwide. Since its founding in 1916, The PGA of America has enhanced its leadership position by growing the game of golf through its premier spectator events, world-class education and training programs, significant philanthropic outreach initiatives, and award-winning golf promotions.

An accomplished and highly regarded golf businessman, Remy holds the distinction of having served in virtually every capacity within the areas of Association governance, including an unprecedented six-and-a-half year term on the National Board of Control, which reviews and rules on membership issues. He was named to the Board in 1997, to finish the term of William A. Mitchell, who passed away, and was then named to his own term in 1999. Remy took part in nearly 1,200 decisions during his tenure.

By 2004, Remy was elected national PGA Secretary, serving a two-year term, until his election to PGA Vice President in 2006, and then PGA president in 2008.

A PGA member since 1984, Remy is the vice president and general manager of the Okemo Golf Division at the Okemo Valley Golf Club in Ludlow, Vt. He began his career at Worcester (Mass.) Country Club, site of the first Ryder Cup played in the United States. He served as a PGA assistant professional at Worcester Country Club and Mount Pleasant Country Club, two of Massachusetts’ premier private facilities.

In late 1997, Remy accepted a position with Okemo Mountain Resort and became responsible for the construction and development of the Okemo Valley Golf Club. Today, as vice president and general manager of the Okemo Golf Division, he is responsible for all aspects of one of New England’s leading membership and resort facilities.

Remy and his wife, Darlene, live in Ludlow, Vt., and have a daughter, Niki.

Remy is also a representative of Nike Golf as a Nike Swoosh Elite Staff Member, represents Great Blue Research and of course Back9Network as a Brand Ambassador and Advisor.

What made you decide to join Back9Network? I really got involved with the Back9Network because I considered it an opportunity to continue to grow our sport.  After leaving office it was okay, what now?  How can I make a difference in our sport.  We need to look at growing our sport differently than we ever have before.  Back9 gives me that opportunity.

Why are you a Back9er? Love being involved with the digital world and looking forward to the future.  Great people and great ideas!  Really the cutting edge!

What is your favorite food? Pepperoni Pizza!

What is your favorite movie and golf movie? Saving Private Ryan & Greatest Game Ever Played

What is your favorite travel spot? Traveled too much the last 8 years!  My house in Port St. Lucie at PGA Golf Club or St. Andrews, Scotland.