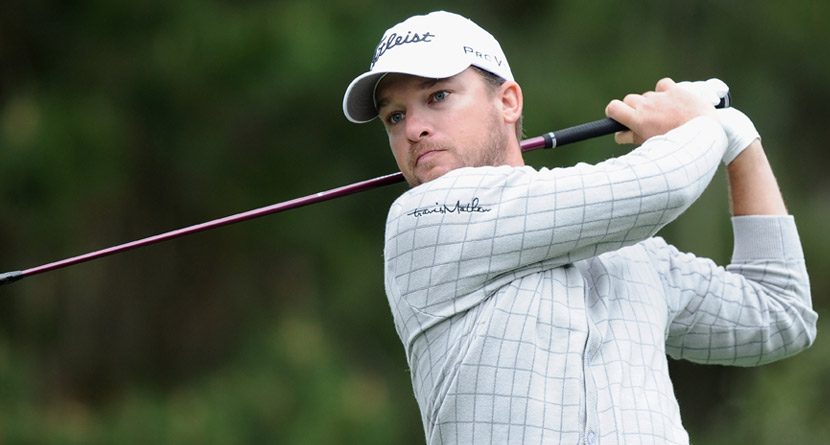 Kyle Thompson is an American professional golfer who resides in Greenville, South Carolina. He was an All-American at the University of South Carolina and graduated in 2001. Thompson returns to the Web.com Tour for 2014, a tour where he has had great success, collecting three wins and ranking in the top-1o of the tour’s all-time money list. He has also played two seasons on the PGA Tour and competed in the 2012 U.S. Open at Olympic Club.

Kyle’s relationship started with Back9Network in the fall of 2012. “I love what the Back9network is all about and I love their vision!” said Thompson. “Golf is in need of a revolution to include the masses and grow the game and that is the vision of Back9Network.”

Kyle says that when not playing golf he is chasing his two kids, 4-year-old Sophia and 2-year-old Sam, around with his wife, Emmi. He also enjoys reading, movies, all sports and anything to do with the South Carolina Gamecocks.

For complete results and stats for Kyle Thompson, click here.

– Lives in Greenville, South Carolina with his wife, Emmi, and their two children

– 8 runner up finishes on the Nationwide Tour

– 2-time Academic All-American while at USC

– Winner of the 2001 Dogwood Invitational

For complete results and stats for Kyle Thompson, click here.

What is your favorite food? I love pizza!

What is your favorite movie and golf movie? Shawshank Redemption and Caddy Shack of course.

What is your favorite travel spot? I love weekend trips to NYC.

What is your favorite car? I’m not much of a gearhead but I think it’d be fun to drive a Ferrari around town.

What is your favorite thing to do off the golf course? Off the course I enjoy playing with my kids and watching USC Gamecock football.

Who would be in your dream foursome? Ben Hogan, Jack Nicklaus and my Dad.