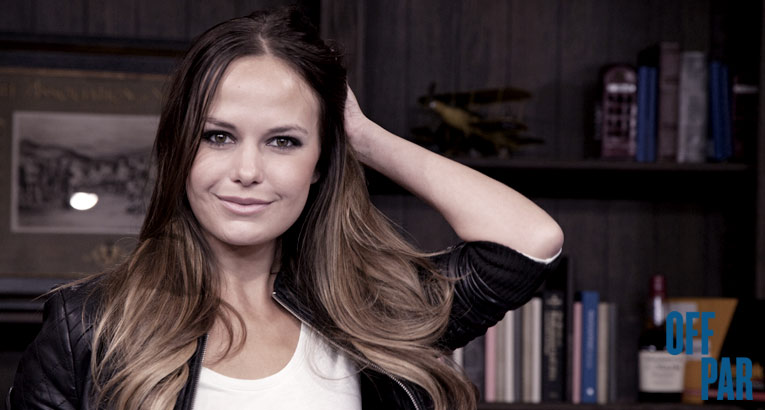 Caite Upton comes from Lexington, S.C. Growing up, she explored many extracurricular activities, ranging from athletics to pageantry. Upton starred on the field, playing for a prestigious U.S. soccer team in Germany at just 16 years old, and at 17, she was crowned Miss South Carolina, Teen U.S.A.

After studying visual effects and business at Appalachian State University, Upton started to build her career as a TV personality and host. She has starred in various commercials and shows such as “The Amazing Race,” ESPN Game Day, and “Jimmey Kimmel Live,” which aired on major networks such as ABC, NBC, CBS and ESPN.

Upton joins Back9Network as a co-host of “Off Par,” a show that takes an inventive look at the world of golf and entertainment, with a seriously comedic twist. Favorite drink: My non-alcoholic go-to is always iced green tea, but if I’m out on the town, I go for tequila on the rocks with two lemons and a lime.

What’s in your bag other than your clubs: A juicy pickle and five bucks.

Favorite movie: “How to Train Your Dragon”

Travel: I’ve been fortunate enough to travel the world because of my role on “The Amazing Race,” and for soccer, but one place I’ve always wanted to go to is St. Petersburg, Russia. I love the culture and the history.

Favorite golf moment:  Being with my dad on putting greens and driving ranges as a kid, learning for the first time how to play.

Passions: I am passionate about God, my parents, my friends, my career, and being sure to treat people with kindness and care. And on a more serious note … turtle racing.

The one thing you can’t live without: My drive … I wouldn’t be where I am today, and I wouldn’t have experienced the things I’ve experienced at such a young age if it wasn’t for my drive to succeed, make a difference, and be a role model.

If you had a tagline, it would be: If you fail, try, try again.

Favorite Back9Network moment: Being able to be a part of an incredible, hard-working company. I’m so fortunate to grow professionally alongside all of my co-workers.

Favorite part of working on “Off Par”: The awesome team we have. Our production staff works up to 18 hours a day at times! None of us would be here if they weren’t our foundation. Their passion for what they do shows every day.

Fun fact people would never have guessed: I enjoy designing architectural sketches. My original career aspirations were in a visual effects and architecture design for video games. Even though my career has taken a different path, I still draw for the fun of it in my spare time.

Never have I ever: Been scuba diving, but I plan on doing it very soon! I’ve always been spontaneous and adventurous, and always will be.