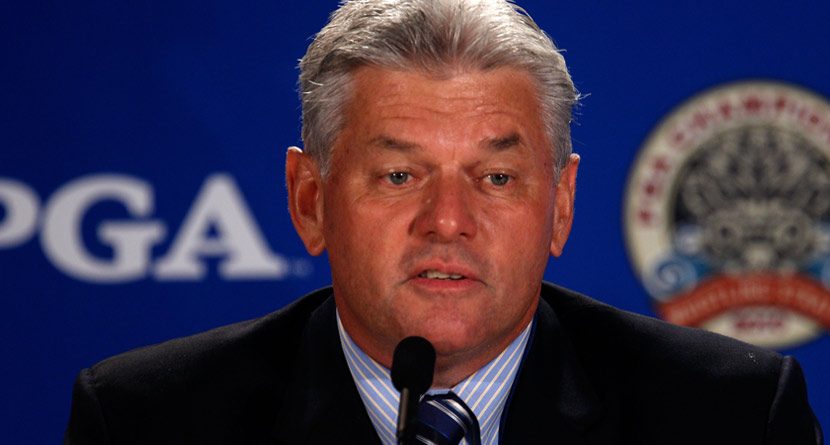 HARTFORD, CONN., APRIL 9, 2013: Back9Network, a golf lifestyle TV and multiplatform media company, announced today that former PGA of America President Jim Remy has joined the network as a Back9Network Brand Ambassador.  Remy will serve as an advisor for the network as well as represent it within the industry. In addition, he will appear on air across Back9Network’s current and emerging TV and digital platforms.

“Jim has had a tremendous impact on the game’s growth, and we are pleased that he will continue those efforts in his new role with Back9Network,” said James L. Bosworth, Chairman and CEO of Back9Network. “We both share the vision of making the sport inclusive to everyone and encouraging more people than ever to enjoy the game of golf and live the golf lifestyle.”

“Joining the Back9Network team allows me to continue my passion of growing the game of golf and provides a new platform to encourage others to enrich their lives with this healthy and active sport,” said Remy. “I both admire and share Back9Network’s passion for making golf inclusive to new groups of people and communicating the many benefits of the sport and lifestyle.  I’ve been impressed with the development of Back9Network thus far and I look forward to working with them to make even more strides forward.”

Remy served as the 36th President of the PGA of America from 2009-2010 and completed his term of office as Honorary President in November of 2012. Remy was the first New England PGA Section member to ascend to the Association’s highest office. He holds the distinction of having served in virtually every capacity within the areas of PGA governance, including an unprecedented six-and-a-half year term on the PGA Board of Control, which reviews and rules on membership issues.

During Remy’s term of office he served on many industry boards including the Folds of Honor Foundation, PGA Tour Policy Board and the USGA Equipment Standards Board.

Back9Network, which made its online debut in 2012, is focused on all the things golf fans love about playing and living the game. Back9Network is currently expanding its multiplatform capabilities, including the completion of its 13,400 square foot digital headquarters in Hartford’s iconic “Boat Building.” In addition, it has started construction on its state-of-the-art TV studio and video production facility in downtown Hartford, Conn., which is quickly becoming the sports media capital of the world with ESPN, NBC Sports and YES Network also based in the state.

About Back9Network: Back9Network, based in Hartford, Conn., is a lifestyle multiplatform television network and media company. Back9Network was developed as a complementary alternative to traditional media’s focus on professional golf tournament coverage. Focused on compelling storytelling, interesting personalities, features and fashions, interviews and instruction, travel, gear and so much more, fans of all kinds will want to hang with the Back9Network. golf.swingbyswing.com, the online clubhouse for Back9Network, delivers a fresh perspective on the golf lifestyle and its worldwide influence.  Back9Network’s leadership includes respected and outspoken executives from the golf and media industries. For further information, visit golf.swingbyswing.com.