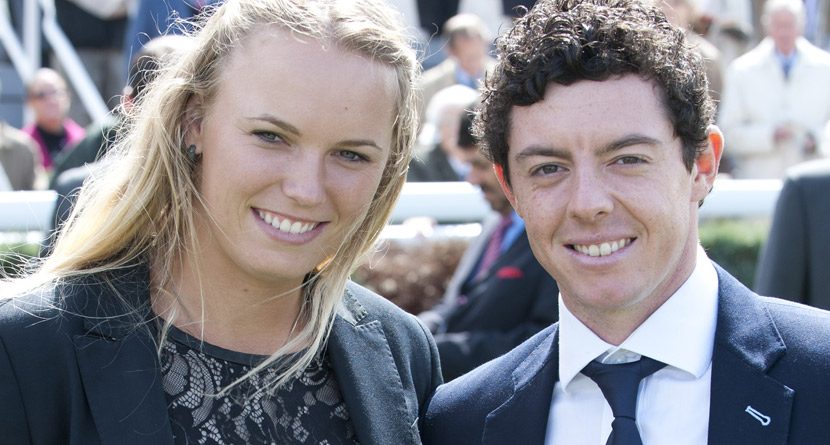 As the temperatures rise on the course our favorite golfers feel the heat off the course as well.  Here’s a look at the hottest PGA Tour players and their significant others. I think it’s safe to say I hadn’t exactly imagined myself ever writing “Tiger Woods” and “relationship” in the same sentence, but he’s found a good thing in fellow athlete Lindsey Vonn.  He’s silencing all the naysayers by playing his best golf in years and with a beauty on his arm to boot.  I think this relationship is highly beneficial to both parties involved.  (She’s even been spotted picking up his kids from school.)  They seem to really enjoy each other’s company while offering a great support system to one another.  In addition, they can sure work a red carpet!  The proof is in the pics from the recent Met Gala in NYC.

Because they share the ultimate competitive drive to be the best in their sport, they both have a lot of other similarities as well.  For instance discipline, lifestyle (working hard and playing hard seems to be their motto) and a rigorous training schedule.  In addition, both are comfortable being in the public eye. (Tell me you have seen the photos of a shirtless Tiger, please.)  I’m all for this pairing!

The only one not loving the duo might be Tiger’s sponsor Nike.  Lindsey was seen wearing Under Armor (Gasp!) during the Masters. But hey, she has her own commitments/endorsements to worry about and she was there cheering on her man.  Cheers to the happy couple!

The “Weather Any Storm” Couple Rory McIlroy had the option to attend his girlfriend Caroline Wozniacki’s match last week at the French Open after he unexpectedly missed the cut at the BMW PGA Championship.  Wozniacki, the former world No. 1 is now being labeled as the underdog against Laura Roboson.  The two make a very attractive couple and I really hope things turn around for them both professionally.

Earlier this year Caroline made quite a buzz when she was seen caddying for her man at the US Masters in the traditional par-three contest.  Even though they both may have hit a bit of a rough patch in their respective sports, their love seems to be reflected in their smiling faces.  With such a great support system, I’m sure they will both bounce back in no time! Not to be outdone by McIlroy, Graeme McDowell also had his beautiful fiancé Kristin Stape caddy for him at The Masters Par-3 Contest.  His stunning wife-to-be owns a design firm and found Augusta to be, “absolutely spectacular.”  Most would say the same about her.  The pair met when McDowell enlisted her design talents to decorate his Orlando home.  Adorable!  Graeme proposed to his beauty like any respectable modern day Prince Charming would, on a helipad on top of a hotel in Dubai.  According to McIlroy, “I’m great friends with Graeme. He’s been like a big brother to me on tour.”  I wonder if Rory will be a groomsmen in the wedding? (That would certainly disprove any rift between them.)  All the best to Graeme and Kristin!

For fun I thought, why not link up single PGA Players with some very lovely ladies?  They can thank me for my matchmaking skills later!

Italy’s Matteo Manassero, 20, is making headlines as the youngest winner at the BMW PGA Championship.  This cutie can handle himself very well under pressure, as evidenced by his sudden-death playoff against England’s Simon Khan and Scotland’s Marc Warren.  His victory proved that he’s a real young gun and someone who should be matched with a young beauty as well.  I like Selena Gomez for him.  She’s gorgeous, talented, sweet and single.  Due to her recent split from on again off again beau Justin Bieber, I think the former Disney star would appreciate the refined taste of a young European man.  (Sorry Biebs, but you have been acting childish.)  The dark-haired pair would make a smashing item indeed!

Golf Boys group member Rickie Fowler, 24, is a PGA Tour player I would like to see with a beautiful model.  Mainly because she’s going to need to look good in orange, since Rickie always wears it on the final day of a golf tournament.  (She’ll also need to show her support in Puma orange as well.)  I think Behati Prinsloo is absolutely perfect for Rickie.  The 23-year-old Victoria’s Secret model hails from Namibia and has a lot of personality.  One look at her Instagram account and you’ll see this fun-loving model isn’t just another pretty face.  After watching Fowler’s commercial for Crown Plaza Hotels entitled “It’s Good to Be Rickie” it’s clear this guy needs someone who can keep up with his infectious personality.  I think Bahati could show him that “It’s Good to Be Bahati” as well. I’m sure up-and-coming supermodels get all types of perks as well.  Maybe they could meet on the set of his next music video… cast her as the love interest.  You see where I’m going with this, right?