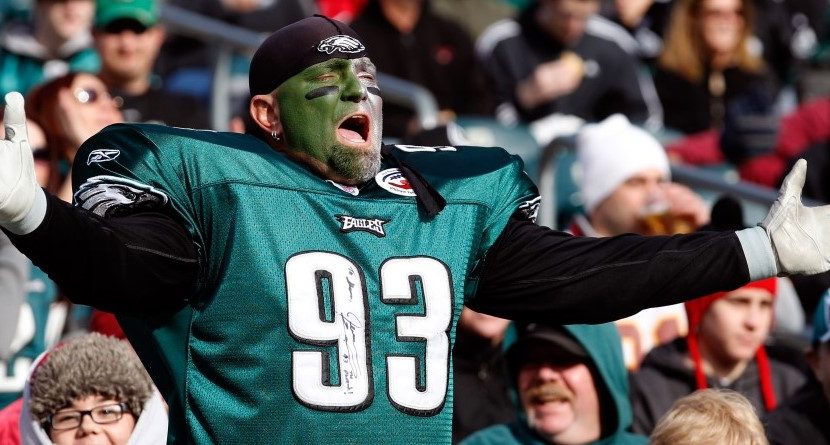 You probably heard – how could you have not? – Tiger Woods and Sergio Garcia have exchanged a few verbal barbs since The Players. They haven’t spoken face-to-face since, but rumor has it that Garcia would like to apologize to Woods in person at the U.S. Open for his racially insensitive comment about fried chicken.

But what will the Philly fans at Merion have to say about this feud? This is a major golf tournament, so fan etiquette is expected to be superb. But this is Philly, known for boasting some of the rowdiest fans in the country.

These are the people who booed and fired snowballs at Santa Claus in 1968. They did the same to the Dallas Cowboys in 1989. Ten years later, with their rivals in town again, Eagles fans cheered while Cowboys receiver Michael Irvin lay motionless on the turf. He had suffered what turned out to be a career-ending neck injury. (Warning: Video below contains some harsh language)

Unruly fans stirred up so much trouble at Veterans Stadium that in 1997 a courtroom was set up in the building’s underbelly. Jail cells were added the next year. But the devotees didn’t even have to be in Philadelphia to garner attention: Dozens of Eagles fans showed up in New York for the 1999 NFL Draft, then booed the team’s first-round selection of Donovan McNabb. Ouch.

And it wasn’t just football. Also in 1999, Phillies fans at The Vet chucked “D” batteries at Cardinals outfielder J.D. Drew, who spurned Philadelphia because it wouldn’t give him the $10 million contract he desired after being the No. 2 pick in the 1997 draft. So he never signed and was drafted by St. Louis in ’98. Spoiled? Yes. But did Drew need to dodge batteries when he finally appeared in Philly? No.

To Philly fans’ credit, they seem to be better-behaved as of late. A jail was included when building the new football stadium in 2003, but lack of use allowed it to be removed within two years. Then again, there was the Phillies fan who got tasered after running onto the field at Citizens Bank Park in 2010.

But we’re confident the fans won’t be an issue during the U.S. Open at Merion. They’re passionate about their Philly teams, and this is golf. But if they were to get riled up… what would they do? Boo Sergio on the first tee? Throw fairway divots at him? Streak across the 18th green?

Here’s hoping we see none of that.

Next Page: Eagles Fans Know How To Tailgate