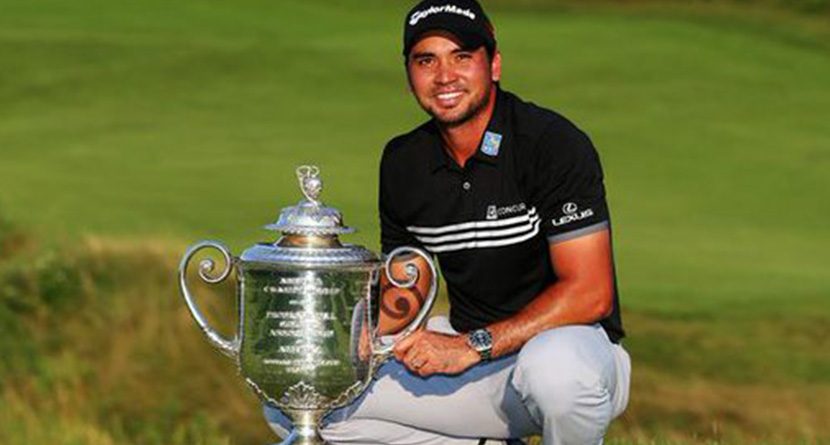 With less than 10 days remaining in 2015, golf.swingbyswing.com is counting down the top-10 golf stories of 2015, one per day until New Years Eve. The stories’ place on this list are a result of a criteria set forth by the writer based upon the impact each had on the golf world this year. Here, at No. 2, Jason Day Goes Full-Blown Superstar.

At the beginning of 2015, Jason Day was the eighth-ranked player in the world. A promising name with a lot of talent, but a penchant for nagging injuries, Day had only won twice on the PGA Tour prior to 2015. When the year came to close, however, Day had won five more times on Tour and broken through as a major champion at the PGA Championship.

Day had a strong start to the year, notching three top-5 finishes in his first four events of the year, including his third career win, a playoff victory over JB Holmes, Harris English and Scott Stallings at the Farmers Insurance Open. A disappointing T28 at the Masters was followed up by a tie for fourth at the Zurich Classic of New Orleans before Day missed back-to-back cuts at the Players Championship and the Memorial leading into the U.S. Open.

Always hailed as a major-champion-in-waiting, Day put himself in position to claim his first major at Chambers Bay before a scary bout with vertigo turned a tie for ninth into a minor miracle.

Despite the scare, Day was able to wrap up his second-round 70, fire a 68 on Saturday to get into the final pairing before a Sunday 75 left him on the outside looking in. However, the best news came a little over two weeks later when the Golf Channel’s Todd Lewis reported that after undergoing going some tests, Day’s vertigo had been pinpointed and was able to be treated.

Spoke to @JDayGolf about his vertigo. Diagnosed with viral infection that’s attacking inner ear nerve. On meds and feels ready for @TheOpen

Going to St. Andrews, Day was again among the favorites to win his first major. Playing well over the first three days of the event, Day found himself in the hunt on Sunday at a major once again, eventually with a putt to insert himself into what would be a three-man playoff.

Another major miss, but Day said an important thing happened during that final round, something that was a forewarning for what was to come for the remainder of the season.

Following that near-miss at St. Andrews, Day flew to Ontario for the Canadian Open where his reign of terror would begin. Outlasting Bubba Watson, David Hearn and Jim Furyk down the stretch, Day won his second event of the year, shooting four rounds in the 60s. He backed that up with a T12 at the WGC-Bridgestone Invitational before the final major of the year.

Not done yet, Day went on to win two more events — FedEx Cup Playoff events the Barclays and the BMW Championship — to give Jordan Spieth a run for his money in the Player of the Year voting. Aside from that, Day would rise to the become the top-ranked player in the world, a carousel that would bounce between him, Spieth and Rory McIlroy until the end of the season solidifying golf’s new “Big Three.”

Promise and potential unearthed and partially fulfilled, Jason Day became a bonafide superstar in 2015, earning him the No. 2 spot on our biggest stories of 2015 list.