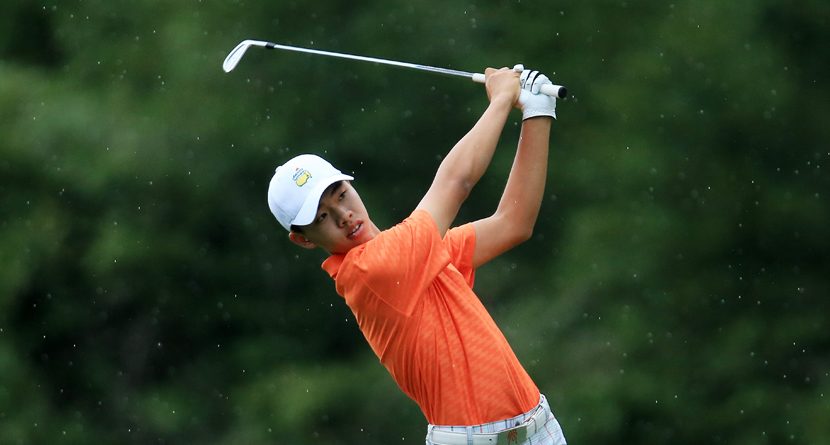 Playing slow in golf is like holding in the NFL. Everyone knows it’s against the rules, but sometimes you just can’t help committing the infraction.

Tianlang Guan, the 14-year-old Chinese phenom who made history Thursday at Augusta National by becoming the youngest person to ever play at the Masters, was flagged for the penalty on Friday.

He received a one-shot penalty, which nearly cost him a chance of playing this weekend.

Guan is 4 over through 36 holes, and he came within one shot of missing the cut. Hours after his round ended, Jason Day — part of the last group on the course — missed a birdie putt on 18. That granted everyone at 4-over par a spot in Saturday’s and Sunday’s rounds.

The penalty was assessed after British scoring official John Paramor twice warned the youngster about his slow play. Paramor told Yahoo! Sports afterward that Guan wasn’t playing all that slow, but he was taking more than the allotted 40 seconds to swing after addressing the ball. Guan was warned on holes 12 and 16, and the two discussed the issue on their way to the 17th tee.

On that hole, Guan “again exceeded the 40-second time limit by a considerable margin,” tournament officials said in a statement. That was when Paramor tacked on an extra shot to his scorecard.

Paramor, who famously warned Tiger Woods and Padraig Harrington about their slow play during a head-to-head battle at the 2009 WGC-Bridgestone Invitational (which led to a Harrington collapse and a Woods win), said he’s willing to work with Guan to make sure he knows the rules. And follows them.

Who else made the cut at the Masters? See the weekend field here.