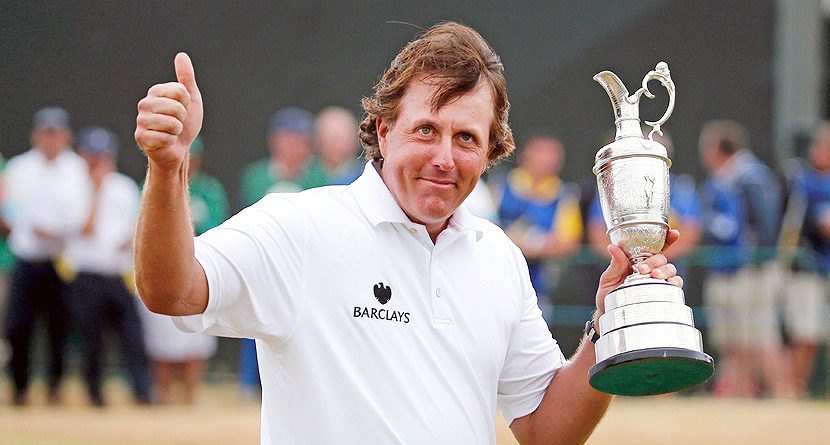 Five shots behind leader Lee Westwood entering Sunday’s final round at the Open Championship, few people discussed the possibility of Lefty pulling out a victory. Which is exactly why we shouldn’t be surprised that he did.

He played the front nine at 2-under, pulling him to even par for the tournament. He promptly bogeyed 10 and appeared set for another nice payday, but just another top 10. Then he closed with four birdies over the last six holes. Two of those came on the 14th and 18th, which played as the fifth- and fourth-toughest holes, respectively, over the course of the entire tournament.

Mickelson’s birdie on 17 gave him a pretty safe two-shot lead.  When his approach shot on 18 bounced just a few feet from a bunker, onto the green, and settled within 10 feet of the cup, the Claret Jug was his. The first Open Championship of his career.

His 5-under 66 marked the lowest score of the day, tied for the lowest round of the tournament, and goes down as the best final round at a major in Mickelson’s career. His move from five shots down to a three-shot victory is the largest comeback Mickelson ever executed to capture a major.

And with that, the fifth major title of a Hall of Fame career, Mickelson joins Byron Nelson, Seve Ballesteros and three others at 14th on the all-time majors list. Only Mickelson, Tiger Woods, Tom Watson and Jack Nicklaus have won three different majors since 1980.

Now, the elusive U.S. Open is the only major championship that evades Mickelson’s resume. He quipped to ESPN after his round, “If six seconds equaled a win, I’d have all four,” referring to the record six runner-up results he’s recorded at that damned U.S. Open.

Plenty of talk will surround that fact next June when the U.S. Open returns to Pinehurst. For now, let’s look back at Mickelson’s four previous major wins:

2004 Masters – Well known as the Best Player Never To Win A Major, Mickelson emphatically shed that label with birdies on five of his final seven holes. The topper was on 18, where he dropped an 18-foot putt for a one-shot victory over Ernie Els. Mickelson’s 31 was the lowest back nine final-round score to win the Masters since 1986, when Jack Nicklaus carded a 30. “It’s hard for me to explain how it feels. It’s almost make-believe,” he said afterward.

2005 PGA Championship – Maintaining his flair for the dramatic, Mickelson’s chip from thick rough on No. 18 stopped two feet from the hole, giving him a tap-in birdie for a single-stroke victory over Steve Elkington and Thomas Bjorn. Mickelson held or shared the lead each day of the tournament.

2006 Masters – After winning the final major of 2005, Mickelson also collected the first one of 2006. And his finish at Augusta actually lacked suspense. He walked onto the 18th tee box with a three-shot lead, and his bogey safely handed him his second green jacket. That was his only bogey of the day, but he topped Tim Clark by two strokes.

2010 Masters – Appearing to have mastered the Masters course, Mickelson cruised to a 16-under 272 and a three-shot victory over Lee Westwood. Lefty trailed Westwood by one stroke entering the day, but he parred the first seven holes, then birdied five of the next 11.