Tiger & Rory Match in China Exclusively on Back9Network and YouTube 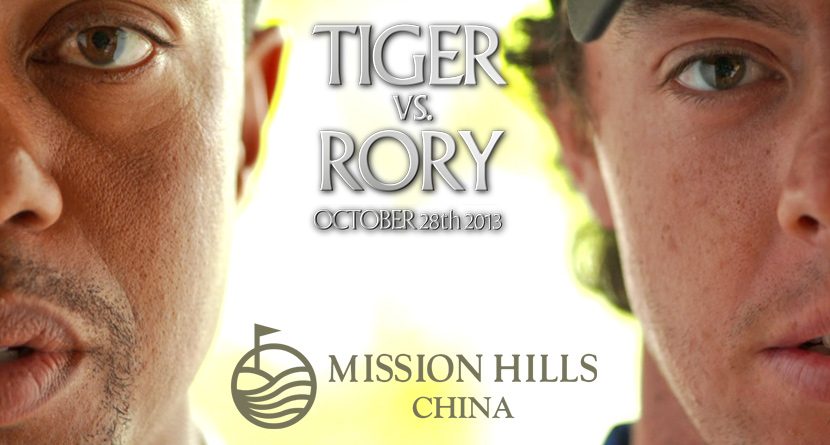 HARTFORD, CONN., September 11, 2013:  The two biggest names in golf, Tiger Woods and Rory McIlroy, will once again square off in a head-to-head battle in China this October.  Back9Network and YouTube will serve as online streaming partners for “The Match at Mission Hills.”  Mission Hills, owner of the world’s largest golf facility, will host the match on its Blackstone Course in Haikou, China, starting at 12:00am EST on October 28th.

Back9Network On-Air Host and Executive Producer Ahmad Rashad, a frequent playing partner of both Woods and McIlroy, will share his unique insights with viewers throughout Back9Network’s 18-hole coverage of the head-to-head event.  Both Woods and McIlroy’s caddies will wear microphones throughout the round, providing fans who watch the live stream with inside-the-ropes access to two of golf’s top professionals.

Back9Network will work with YouTube, who will provide a global distribution platform for “The Match at Mission Hills,” streaming the live event worldwide on golf.swingbyswing.com and YouTube, excluding the U.S. and Canada.   In addition, “The Match” will be televised globally outside the U.S. and Canada and is owned and operated by Infinite Ideas International for the second straight year.

“We are excited to showcase Tiger and Rory from China,” said James L. Bosworth, Chairman and CEO of Back9Network.  “Bringing a head-to-head match like this to Back9 helps us showcase and grow the game in the rest of the world, a key initiative of the Back9Network.”

“Having played with both golfers, I know it will be more than just an exhibition,” said Rashad.  “Tiger and Rory are two of the most competitive athletes in the world, and neither wants to lose this match.”

The 2012 “Duel at Jinsha Lake” saw McIlroy take home the trophy by shooting a bogey-free 67, edging out Woods, who lipped out a bunker shot on the 18th hole that would have resulted in a draw of the match.  The 2013 “Match at Mission Hills” will possess a similar schedule to the 2012 event, including an opening ceremony, warm-up session, and 18-hole match for spectators, as well as hospitality, private clinics with Woods and McIlroy, and a gala dinner in the evening for event sponsors and partners.

Back9Network, which made its online debut in 2012, is focused on all the things golf fans love about playing and living the game.  Back9Network’s state-of-the-art TV studio and digital video production facility is located in downtown Hartford, Connecticut, which is quickly becoming the sports media capital of the world with ESPN, NBC Sports and YES Network also based in the state.  Back9Network plans to launch its television-programming lineup via cable and satellite in 2014.

About Back9Network: Back9Network, based in Hartford, Connecticut, is a lifestyle multiplatform television network and media company.  Back9Network was developed as a complementary alternative to traditional media’s focus on professional golf tournament coverage.  Focused on compelling storytelling, interesting personalities, features and fashions, interviews and instruction, travel, gear and much more, fans of all kinds will want to hang with the Back9Network.  golf.swingbyswing.com, the online clubhouse for Back9Network, delivers a fresh perspective on the golf lifestyle and its worldwide influence.  Back9Network’s leadership includes respected and outspoken executives from the golf and media industries.  Back9Network recently moved into its new Corporate Headquarters and TV/Video Production Studio in Hartford, joining ESPN, NBC Sports and YES Network in Connecticut. For further information, visit golf.swingbyswing.com.