Tiger Woods May Be Disqualified From Masters After Improper Drop 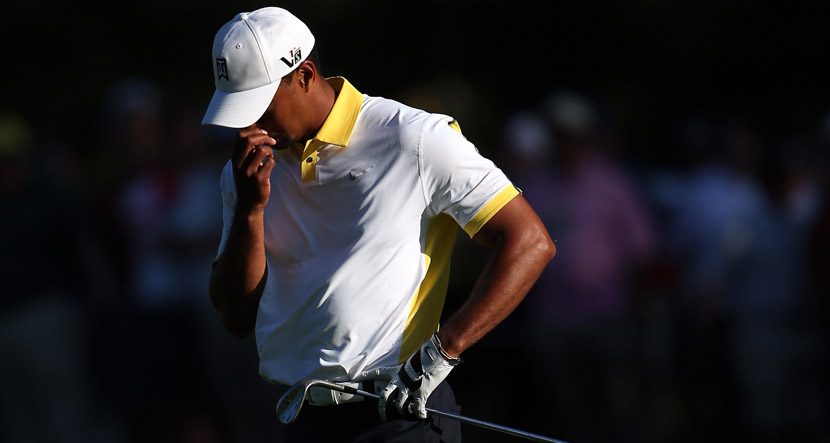 A bad break on Friday for Tiger Woods could result in the worst possible break on Saturday morning at the Masters.

Woods may be disqualified by rules officials after taking what could be considered an improper drop at the par-5 15th in the second round after his third shot struck the flagstick and went backward into the guarding water hazard.

According to Back9Network content-sharing partner, the Southern California Golf Association, Woods was taking a drop for his fifth shot under Rule 26-1a, which required the world No. 1 to drop his ball “as nearly as possible at the spot from which the original ball was last played (Rule 20-5).”Woods declined his other two options in the situation:

Woods, however, admitted he dropped his ball “two yards behind” the spot where he struck his third shot after declining to hit from the designated drop zone at No. 15 or dropping the ball by keeping a point between the hole and the last place his third shot crossed the margin of a hazard.

“I went down to the drop area, but that wasn’t going to be a good spot,” said Woods after play. “So I went back to where I played it from, but I went two yards father back and I tried to take two yards off the shot of what I felt I hit.”

Video footage shows Woods was at least a few feet away from the divot he took with his third shot.

Now the decision is on the Masters rules committee if Woods did drop “as close as possible.” If they rule he did, there’s no harm. If they find he did not, three things could happen:

(1) Woods could be disqualified for taking an improper drop and not assessing that penalty on his score, meaning he signed an incorrect scorecard, resulting in an automatic DQ, or

(2) the rules committee could choose to invoke Rule 33-7: “A penalty of disqualification may in exceptional individual cases be waived, modified or imposed if the Committee considers such action warranted.

Any penalty less than disqualification must not be waived or modified,” or

(3) the rules committee could say Tiger did meet the “as close as possible” qualification and let him go unscathed.

It seemed Decision 26-1/17 could have also helped Woods, which affords a player to continue without penalty for making an “honest mistake” with his drop, but that applies to a drop taken from a lateral water hazard, which the pond at No. 15 is not.

This sounds complicated. Either way, Woods is awaiting a ruling this morning.

However, if deemed an improper drop, it would be the second time this season Woods has mistakenly applied the Rules of Golf. In January at the Abu Dhabi HSBC Championship, Woods mistakenly took relief under the “embedded ball” rule from a patch of vegetation growing in a bunker. European Tour rules officials, however, alerted Woods of the error before his signed his scorecard, allowing Woods to assess a two-shot penalty for the mistake.

If Woods is saved, it would also not be the first time what can be perceived as an improper drop was not penalized. In 1958, Arnold Palmer won his first Masters title, however, final-round playing partner Ken Venturi believed Palmer took an improper drop at the par-3 12th hole. Palmer’s tee shot plugged and, under a local rule for the week, both believed he was entitled to relief. The rules official, however, did not. Palmer made a double-bogey 5 on his first ball. In protest, Palmer played a second ball, taking relief from the plugged ball and making a par. At the end of the round, it was deemed Palmer was right. He won that Masters and three more.