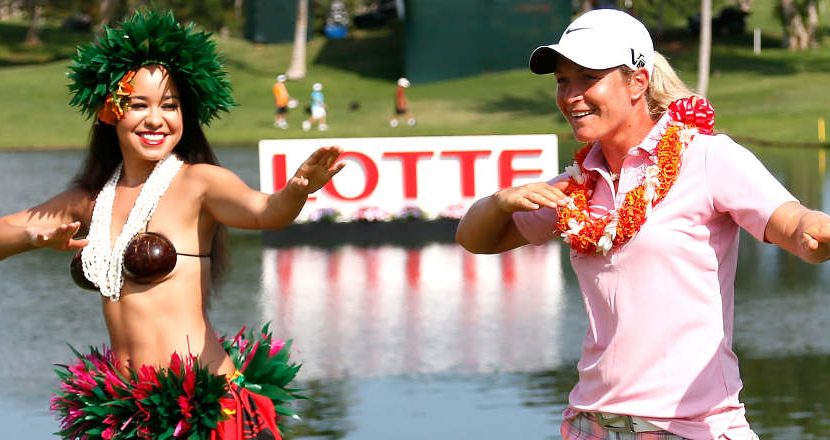 Suzann Pettersen was a winner for the 11th time on the LPGA Tour on Saturday, taking the LOTTE Championship in Hawaii in a playoff over Lizette Salas. As you might be able to tell from the picture and this tweet, she was pretty happy about it.

Get me close to Asia and Iam loving it!! A fantastic week here in Hawaii and another W under the belt!! Very happy #makeitcount

With 30 mph winds expected in the final round of the RBC Heritage at Harbour Town, Jason Dufner offered a word to the wise.

Those boys might need a helmet this afternoon at RBC, windy and tricky

Pro golfers are forgetful just like the rest of us. The problem for them is that a lot more money is on the line.

4. Rickie getting a little dirty

With MotoGP in Austin, Texas, this weekend, bike aficionado Rickie Fowler has been Instagramming like its Christmas morning.

Watch for me coming in hot into Turn 1 @redbullig #givesyouwings #MotoGP #pinned ✊ instagram.com/p/YXyjsiwuzL/ 5. Washed out in South Africa

The Ladies European Tour is in South Africa this week, including our correspondent Cheyenne Woods. Unfortunately, massive storms caused rounds to be canceled this week. Becky Brewerton shares why.

Delighted to announce I have finally joined twitter. No other accounts are associated with me.

Ah, the joys of turning 18 (on Feb. 10). Lexi Thompson is trying to strike it rich! Well, keep striking it rich. Jesper Parnevik missed a 5-footer on Saturday morning to expand the cut line at the RBC Heritage to a record 91 players. Then he got sent packing after the putt he missed caused a third-round cut.

Driving back to Florida after missed Saturday cut.They say Saturday is moving day, and I have to agree, the traffic is moving pretty well…

Finally, after a very difficult week for the people of Boston and the surrounding community, New England native Keegan Bradley succinctly recapped the week.