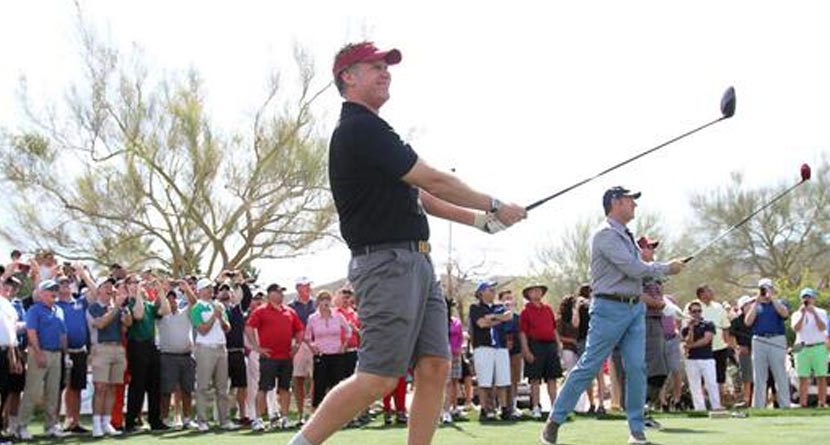 We first told you about the opportunity to tee it up with Will Ferrell in January and if this is news to you now, then you’ve missed your chance. That’s because Ferrell’s Desert Showdown took place this past Monday and Tuesday in Palm Springs, Calif. The star-studded event took place over two days and included the Will Powered Golf Classic hosted by Will Ferrell at the Bighorn Golf Club and the Desert Smash celebrity tennis event at La Quinta Resort & Club.

Mr. Ron Burgundy aka Frank the Tank aka Will Ferrell is off & running @DesertSmash! #gopro pic.twitter.com/SfdWbnmDCX

The events were all to benefit Cancer for College, the charity created by Ferrell’s long-time friend and two-time cancer survivor Craig Pollard. The event also included charitable auctions where fans and participants could bid on autographed items and other special experiences. In years past, the auction even included a walk-on role in one of Ferrell’s movies. This year’s favorite? An autographed cow bell, of course!

The best auction item here? The cowbell signed by Will Ferrell. #desertshowdown pic.twitter.com/4bSXi2x6bi

Some of the celebrities and special guests who participated this year included:

Thanks @DjokerNole x crushed it!! pic.twitter.com/WURLRzDBsH

Played tennis today for a good cause. I, & this other cabana uniformed boy played. @desertsmash #desertsmash pic.twitter.com/Puu7mcZCbQ

and RedFoo from LMFAO

Look who we were greeted by @DesertSmash @RedFoo #thanks pic.twitter.com/wOp6bSTrxY

It’s obvious that Will Ferrell is a golf nut, so seeing him play in a charity event isn’t a surprise. In fact, Ferrell showed off his swing during his media tour for “Anchorman 2” last summer and got Rory McIlroy into the film’s premier. Perhaps the best pic from the event was this one of Ferrell donning a green jacket.

Will Ferrell is in the desert & the green jacket is on! The Will Powered Golf Classic benefiting @CFCcharity on now. pic.twitter.com/bSpPXg7h6H