A Look Back At Mickelson’s Five U.S. Open Runner-Up Finishes 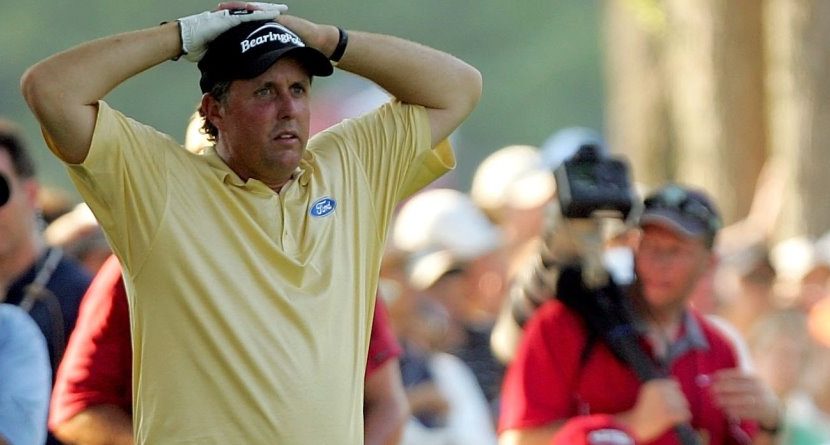 Aside from his wedding day and the days his three children were born, could there be a bigger day than Sunday in Phil Mickelson’s life?

Through three rounds at the U.S. Open, Lefty leads the pack as the one and only player under par (a 1-under 209). He’s on the verge of winning his first career U.S. Open. On his 43rd birthday. On Father’s Day. At the end of a week in which he pulled quite a “fatherly” move, skipping crucial practice time so he could attend his daughter’s eighth-grade graduation.

But this is the U.S. Open. His nemesis. The tournament in which he’s placed runner-up a record five times. That’s more second places in majors (not even counting the T2 at the 2011 British Open) than first places. This is the one that’s always gotten away.

Surely he’s aware of what’s at stake. Surely he’s hatched a plan to deal with the pressure. Surely he’s not thinking of the five previous times in which he’s come oh-so-close to hoisting that U.S. Open trophy.

But we can’t help but think of those five runners-up. So here’s a recap: 2002 – Mickelson shot a 67 on Saturday to move into third place, but he still trailed the leader, Tiger Woods, by five strokes heading into the final round. Mickelson scored a 70, giving second place all to himself, but Woods still won by three shots. The idea of Mickelson being the “best player to never win a major” began to grow.

2004 – Mickelson tossed the no-majors monkey off his back by collecting the Masters title in 2004, and he entered the U.S. Open weekend with a share of the lead. A third-round 73 didn’t help matters, but he was just two shots back going into Sunday. Mickelson surged into the lead at one point, but that was all for naught when he three-putted from five feet on 17 and took a double bogey. Retief Goosen secured the title by two strokes.

2006 – This one hurt the most. A win at the U.S. Open would have made it three straight majors for Mickelson, who shared the lead Sunday morning. But an up-and-down final round unraveled on the par-4 18th, where he needed only a par to win. Mickelson’s tee shot sliced so wide left that it nailed a hospitality tent. His second shot hit a tree. His third shot dove into a bunker. His fourth shot landed on the green but rolled off. His fifth shot – which still could have forced a playoff – was never close. Geoff Ogilvy took the trophy. “I still am in shock that I did that,” Mickelson said afterward. “I just can’t believe that I did that. I am such an idiot. I can’t believe I couldn’t par the last hole. It really stings.”

2009 – Mickelson surprised some by opting to play as his wife, Amy, was battling breast cancer. But she encouraged him to go for it, and he took a share of the lead on Sunday. Yet his back nine became all too familiar. He missed a birdie putt at No. 14, three-putted for bogey on 15, and took another bogey at 17. Lucas Glover collected a two-shot victory over Mickelson and two others, giving Lefty his fifth runner-up finish at the national championship.