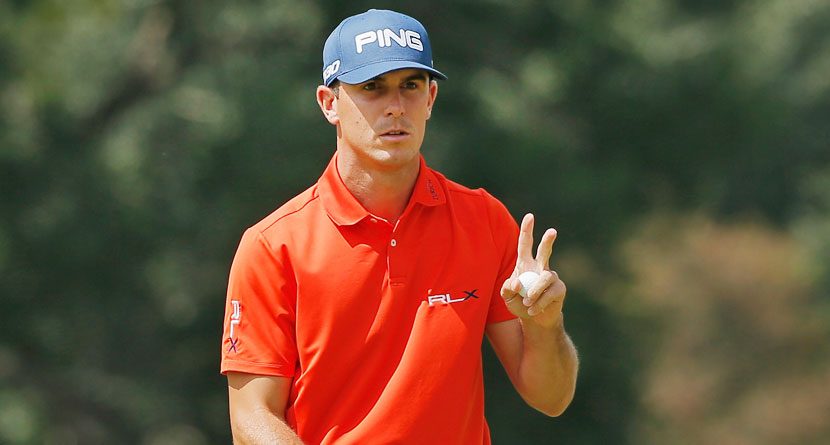 Billy Horschel jumped out to a share of the lead at the Tour Championship after a first-round 66 on Thursday. Many would say he controls his own destiny in regards to taking home the FedExCup and winning a cool $10 million. There is, however, one thing that could complicate things.

Horschel and his wife, Brittany, are expecting their first child soon. But he’s already said he’ll take a different approach than past golfers if his wife goes into labor early.

“Yeah, my wife and I are due two weeks from Saturday. Expecting our first child, a little girl,” Horschel said after his round Thursday. “And, I mean, on the golf course I’m not thinking about it. We have decided that if she goes into labor while I’m playing, I will just keep playing, because $10 million is a lot of money and I’m not going to pass that by. And I’ll just fly home after the round and fly back couple hours later, spend some time with them.”

He’s right: $10 million is a lot of money. And I can’t think of a instance where a player has been put in a situation with that much at stake. Of course, Phil Mickelson carried a beeper on him during the U.S. Open in 1999, but $10 million is a different beast altogether. At least, in Horschel’s eyes. And it helps that his wife supports the decision.

“My wife is totally on board,” Horschel said. “My wife played golf at the University of Florida. She’s a golfer. She understands what this victory and FedExCup playoffs and what it all means. I’ve probably got the greatest wife out here, in my mind.”

It’ll be interesting to see how this all plays out, especially since Horschel said he “won’t find out on the course,” because his “focus may be taken away from the task at hand.”

Let’s just hope the situation doesn’t present itself so he can be there for the birth of his child and win $10 million.

I’m pretty sure his celebration would go a little something like this: