11 Golfers Who Would Make It In The NFL 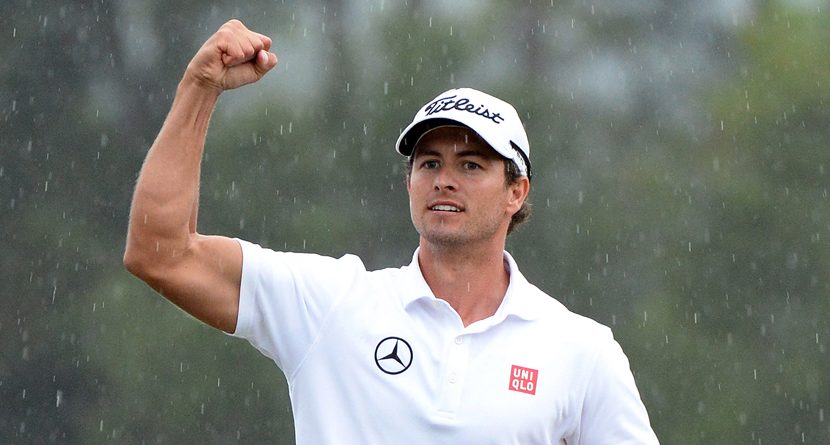 Did you ever notice the number of active and retired professional athletes that play golf? It’s a pretty high number.

But here’s one for you: Have you ever heard of a golfer delving into another sport? Say, football?

With the 2015 NFL season underway, we slipped into a pair of shoulder pads and football cleats and came up with a list of golfers who we think would make it in the NFL.

He’s jacked and ripped, although he’s deceivingly skinny in the waistline. Plus, he won the 2008 U.S. Open while hobbling all weekend (along with the Monday 18-hole playoff) on a broken leg — a double stress fracture of his left tibia, to be more specific. Did we mention he’s jacked? He and his former girlfriend Lindsey Vonn, an Olympic gold medalist in Alpine skiing and a workout junkie, probably held weightlifting competitions with each other. Consider us sold on Tiger in the Big Apple. Anyone nicknamed “The Big Fijian” needs to play one of two sports: American football or rugby. Singh is 6-foot-2 and strong as an ox. He consistently drives the ball close to 300 yards (he averaged close to 290 this year). Could he give Rob Gronkowski a run for his money? Somebody call Bill Belichick.

#3: Tim Herron
Position: Center
Best team fit: Pittsburgh Steelers… Because if you didn’t know who he was but met him in a bar and he told you he played center for the Steelers, you’d totally believe him.

At 5-foot-10 and 250 pounds, Herron looks like an ice chest you see in old movies. What he might lack in muscle definition he has in body mass. Put him on the offensive line and defenders would have a hard time getting through to the quarterback. He’s probably not agile enough to play guard or tackle, however. He might have the largest set of hands we’ve ever seen on a golfer. Thorpe is also built like a brick you-know-what, standing at six feet and tipping the scales at 205 pounds. He looks menacing and would be an asset to any team at a variety of positions. In 2007 at the age of 58, Thorpe averaged 281 yards with the big stick.

For as much sprinting as this guy does on the golf course, it’s a shame he wasn’t a pigskin warrior. Every time Garcia hits a blind shot, he takes off running to see where the ball lands. He’s an inch taller than former Denver Broncos wide receiver Wes Welker but 25 pounds lighter; throw him in the weight room for a few months, put him on a high-protein diet and he’ll be ready for the NFL. Every football team needs a nice face, and more often than not it ends up being the man standing behind the center. Scott is good looking — according to the folks at The Bachelor and Jason Dufner, at least — and at 6-feet, 180 pounds, he has the body of a quarterback. And how about those guns he calls biceps that were on display after his curse-breaking Masters victory? Somebody run a post pattern and see what happens.

When it comes to the dichotomy that is golf and football, Irwin plays the role to perfection. A three-sport athlete in high school (football, baseball and golf), Irwin attended the University of Colorado and played golf and football. Among his achievements as a Buffalo: two-time All-Big Eight defensive back and an academic All-American on the gridiron. On the golf course, Irwin was the NCAA Division I champion his senior year. He decided to become a pro golfer a year later in 1968, but football could have easily been his career choice.

In the spirit of the 1991 film Necessary Roughness, it’s only fitting that we include an LPGA player on this list. The honor goes to Sorenstam for a few reasons. She has the athleticism. She’s retired from the sport of golf, and although she’s got other stuff going on, like being a mom and designing golf courses, it wouldn’t hurt to add another activity to the mix. Plus she was a soccer player as a kid. Let’s get ahold of Kathy Ireland and have the two ladies stage a kick off. With football in his pedigree, this was an easy selection. Van Pelt’s father Bob was chosen by the Philadelphia Eagles in the fifth round of the 1967 NFL draft as a center. Bo is 6-foot-2 and 200 pounds, making him a solid candidate for the defensive side of the ball. His 296-yard driving average in 2012 shows he’s got some muscle packed onto his frame.

Another player with football in his blood, Glover’s grandfather was a two-sport standout at Clemson in baseball and football. He earned a spot in the university’s Hall of Fame for his efforts. Glover, who won the U.S. Open in 2009, sported the “Grizzly Adams” look during the 2011 season with a thick beard that complemented his mop of hair quite nicely. Football players have often gone with the bearded look, so he’s already looking the part.

This Brit grew up playing soccer and rugby before swinging a golf club for the first time at age 13. He tipped the scales well into the 200s during the middle part of his golf career, but in the last few years he slimmed down and packed on some muscle. Now 40, Westwood has a 205-pound body on his 6-foot frame. His new-found dedication to fitness proves he’s able to stay toned up, a must on the football field. He may not have Barry Sanders-like finesse or the line-clearing power that we saw in Jerome Bettis, but he’d be a solid choice to start in the backfield if he stays between the tackles.