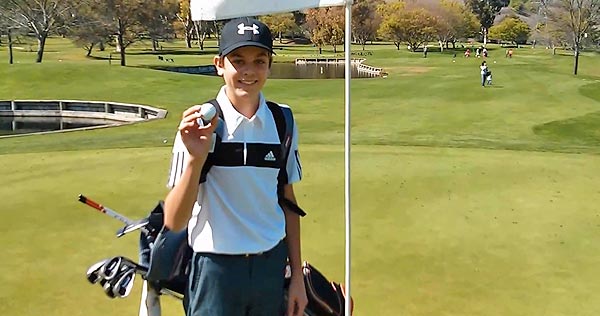 The hole-in-one is arguably the most difficult thing to attain in all of sport. There is seemingly no rhyme or reason as to who makes one. We’ve seen aces worth millions of dollars and aces by 92-year-old women. We’ve seen walk-off, tournament-winning hole-in-ones and ones that have skipped across a pond. But hold onto your hats, because now we have back-to-back aces by a golfer barely in his teens!

That feat was accomplished by the son of San Jose Sharks head coach Todd McLellan. Cael, was playing in a tournament at Santa Teresa Golf Course in San Jose, Calif. this past weekend when he aced holes no. 8 and no. 9 consecutively.

Cael finished third overall in the tournament, which is impressive in its own right, but the story is obviously the aces. Keep in mind, the odds for an amateur making a single hole-in-one is 12,500 to 1. The odds of them making two in their lifetime is significantly higher.

Two in a row has actually happened before. In 1971 at the Martini Tournament in Sandwich, England, John Hudson made one on the par-3 11th hole and another one on the par-4 12th hole. The odds of achieving that? According to a story by Golf Digest, only 1 in 50 million.

Now it makes sense that amateurs would have longer odds at pulling off the same improbably feat. According to U.S. Hole In One the odds of that run nearly 156,250,000 to 1, or about the same chances as winning the Powerball lottery. Related Links: This 92-Year-Old Woman is Your New Golfing Idol