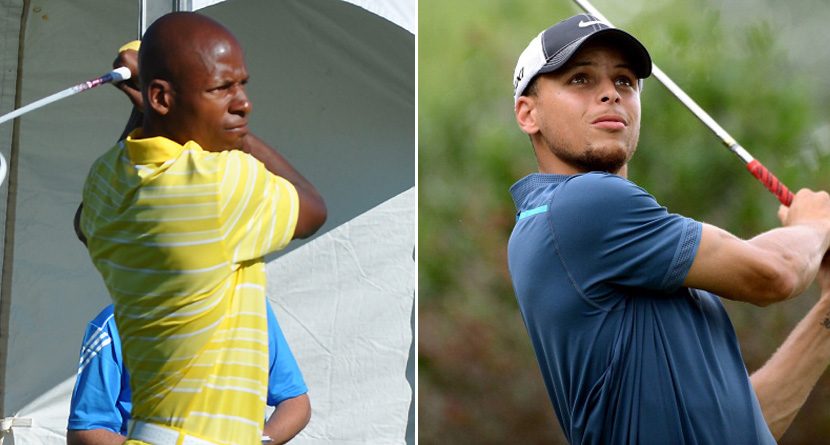 Here are the nine NBA players who’ve used their offseasons – and probably many of their off days during the season – most successfully to hone their golf games:

Stephen Curry, Golden State Warriors – Curry made his first tournament appearance over the summer at his family’s Curry Celebrity Classic, then he tied for fourth at the American Century Championship, the annual celebrity golf tournament in Lake Tahoe. He actually sat atop the leaderboard after the second round, but posted a 3-over-par 75 on the last day to fall back. Still, he was the top active athlete, and improved from his T-28 finish in 2010. Curry says he has a two handicap, aided by three years on his high school golf team.

Ray Allen, Free Agent – The two-time NBA Champion and 10-time NBA All-Star puts on a golf tourney benefiting the Ray of Hope Foundation every year, is a regular in the annual Lake Tahoe celebrity event (37th in 2013, T23 in 2011) and was ranked as the top current NBA player in Golf Digest’s 2009 list of top athlete golfers.

Kyle Korver, Atlanta Hawks – Also known to host golf tournaments for his Kyle Korver Foundation, Korver’s handicap has been reported to be anywhere from five to eight.

Deron Williams, Dallas Mavericks – Williams is also a regular in Lake Tahoe, where he debuted in 2011 and tied for 46th overall, second among active NBA players behind Allen. He says he’s dabbled in golf for only six years, but has about an eight handicap.

J.R. Smith, Cleveland Cavaliers – Smith so enjoys golf that even the NBA playoffs can’t keep him away from the course. In 2013, the Knicks (Smith’s previous team) faced the Celtics in the first round, and in Game 3 he threw an elbow that earned him a one-game suspension. The Knicks, up 3-0, lost Game 4 without Smith. Had he played, he said New York would have won. Had the Knicks won, he “would have been playing golf” instead of getting ready for Game 5. Smith began golfing in 2008 and claims to own an eight handicap.

Chris Paul, Los Angeles Clippers – The avid golf fan said he got some valuable tips by playing in a pro-am at the 2012 Wyndham Championship with Davis Love III. Over this past summer he played with former president Bill Clinton, and a few months prior he competed in the Michael Jordan Celebrity Invitational. Reports have Paul’s handicap hovering around 20.

RT @billclinton: Great afternoon getting to know @CP3 and the good work he’s doing through his foundation. pic.twitter.com/gcN3Y6UUrk

Shane Battier, Miami Heat (Retired) – Also in that range of handicap is Battier, who could benefit from some help from Allen, his former teammate in Miami. Battier was also in Lake Tahoe this summer, finishing 81st. In 2012, he was the top finisher among active NBA players (67th overall), but it should be noted that guys like Curry, Allen and Williams weren’t there.

Paul Pierce, Los Angeles Clippers – We couldn’t find any reports of Pierce’s handicap, but during the 2011 NBA lockout, not long after he took up the game, he claimed to be getting pretty good. He obviously had plenty of time on his hands back then. No word on if he’s improved much since.

Mike Miller, Denver Nuggets – Miller lost some solid golf buddies when he was amnestied by the Heat in 2013, but he supposedly could’ve been playing free golf for a year while he was in Memphis. Point guard Mike Conley reportedly offered to pay for Miller’s golf if the sharpshooter signed with Memphis. What a genius recruiting tactic.