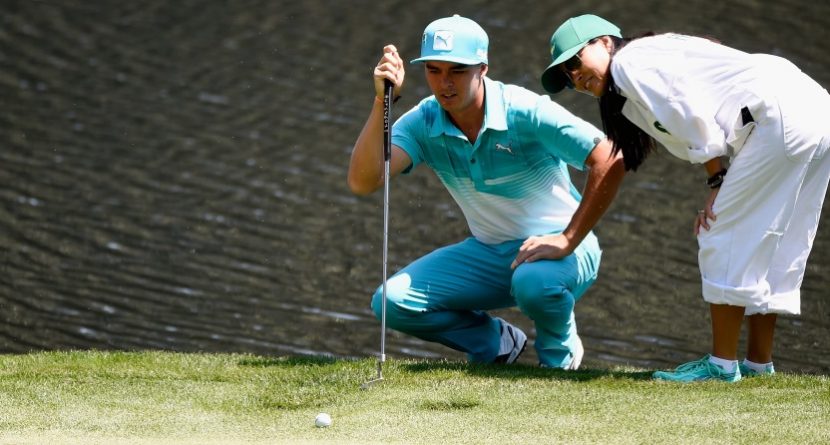 Tons of golfers have their mother to thank for helping them get to the elite level on which they play. Other than the obvious (birthing them into this world), there were clubs to buy, lessons to pay for, course snacks to make, and occasionally a shoulder on which to cry — in good moments and bad.

So there are few people prouder than mothers when it comes to their sons or daughters triumphing on the big stage. Here’s a look at nine cool moments when moms got to share the spotlight:

Rickie and Lynn Fowler
When Rickie Fowler broke through for his first PGA Tour win at the 2012 Wells Fargo Championship, his mom, Lynne, was there to help him hoist the trophy. She also carried his bag this year at the Masters Par-3 Contest. As Rickie was growing up, Lynne was never one to stifle his dreams:

Bubba and Molly Watson
After Bubba Watson captured his first Masters title in 2012, he needed someone to hug while he cried tears of joy. His mom, Molly, came to the rescue. Keegan and Kaye Bradley
Keegan Bradley’s mother, Kaye, has witnessed some very big moments for her boy: his 2011 PGA Championship win and stellar 2012 Ryder Cup performance, in particular. She served as his caddie at the 2012 Masters Par-3 Contest, and even took a tee shot. It was about time she got to hit after driving Keegan around in the snow to practice as a kid:

Ian and Theresa Poulter
Theresa Poulter was watching her son compete in a tournament one day when she became a bit miffed that the announcers weren’t mentioning how well Ian was playing. So, urged on by another son, she called into Sky Sports and requested an explanation. Sure enough, they mentioned her on air, and her son too. She later carried his bag at the 2011 Masters. Paula and Karen Creamer
Paula Creamer was an only child, and her father was an airline pilot, so she got to spend plenty of time with her mother, Karen. Both mother and father were on hand to witness Paula collect her first career major, the 2010 U.S. Women’s Open. Phil and Mary Mickelson
Few golf fans will ever forget the emotional scene that unfolded following Phil Mickelson’s victory at the 2010 Masters, his third such title. His wife, Amy, had been undergoing treatment for breast cancer and it wasn’t clear if she’d be able to make to Augusta. But there she was to greet Phil as he came off the green – and so too was Phil’s mom, Mary, who also had been battling breast cancer. Phil’s third green jacket brought some much-needed joy to the Mickelson family.

Michelle and Bo Wie
Bo Wie has always been a present figure at tournaments with her daughter, Michelle, especially when the youngster turned pro before turning 16. Bo was South Korea’s 1985 women’s amateur champion and actually taught the game to B.J., her husband and Michelle’s father. The whole family was on hand for Michelle’s first victory as a pro, taking the LPGA Tour’s 2009 Lorena Ochoa Invitational. Tiger and Kultida Woods
Sports Illustrated called it the “greatest performance in golf history,” and to this day it remains the largest margin of victory ever at a major championship. Tiger Woods stomped the field by 15 strokes at the 2000 U.S. Open, earning his first national championship and third over all major at 24 years old. Taking pictures with the trophy next to the superstar’s side was Kultida, Tiger’s mother, one of many times she’s celebrated a major with her son. Davis and Penta Love
Davis Love III was born into a golfing family – his dad a noted instructor; his mom a low-handicapper. Unfortunately, his father passed away in a plane crash in 1988, just a few years after his son had turned pro. He would have loved to see Davis capture the 1997 PGA Championship, his first and only major, but Davis’ mother, Penta, ran onto the green to embrace her son with enough love for she and her late husband.