9 of the Worst Golf Shots In History 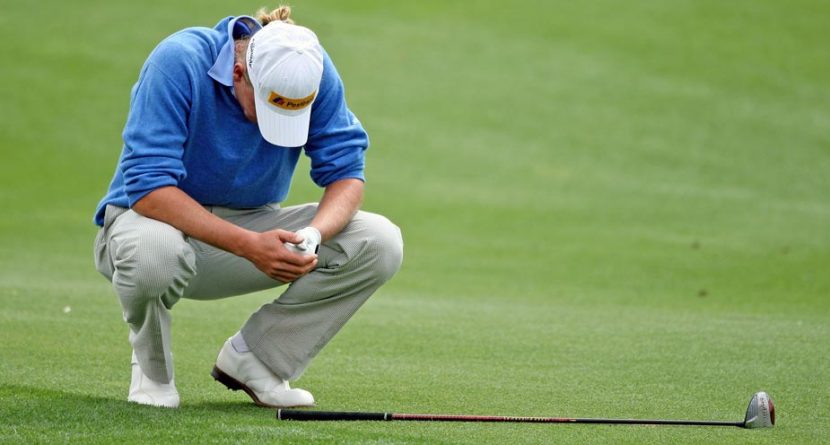 Every now and then, we’re reminded that PGA Tour players are human like the rest of us. Sunday at the Valspar Championship, Justin Rose gave us one of those moments. In a shot that was meant to be an easy flip-wedge onto the green, Rose chunked his approach, nearly sending his divot farther than the ball.

Rose immediately knew the shot was ugly, letting go of his club at the top of his swing. At least Rose had a laugh about the shot on Twitter later on.

Glad you all enjoyed the chunk in 9! Haha. #BigBallSmallBallAndAllThat

Seeing Rose’s failed shot into the green got us thinking about some of the worst shots in golf history.

Henrik Stenson’s shank from a few weeks ago immediately came to mind. It needs no explanation.

Mahan comes up short for USA

On one of the biggest stages in golf, Hunter Mahan failed to step up for his country. In the 2010 Ryder Cup, Mahan flubbed this chip in his match against Graeme McDowell, failing to even reach the putting surface.

This next sequence of putts is one of the worst you will ever see, showing kids everywhere what NOT to do when you’re left with a short putt. Charl Schwartzel four-putted on the 18th green at the 2012 Deutsche Bank Championship, failing to ‘finish in style.’

Even world ranked No. 1 Tiger Woods has his fair share of bad shots. At the Abu Dhabi HSBC Golf Championship in 2013, Tiger hit a drive that missed the fairway… short. He completely topped the ball, failing to even reach the short grass.

At this year’s Abu Dhabi Championship, Phil Mickelson made a triple-bogey that sunk his chances at winning the tournament. How did he make that triple? With a little help from a double-hit right-handed swing from under a bush.

One-foot for the win

IK Kim had the 2012 Kraft Nabisco Championship within reach on the 18th hole. Within one foot to be exact. She had a very short putt to win the championship on the final hole, but failed to sink the putt as the ball lipped completely around the hole, sending the ball back to her feet.

T.C. Chen, now nicknamed “Two-Chips Chen,” hit one of the more embarrassing shots in golf – the double hit – at the 1985 U.S. Open. Chen was leading by four strokes on Sunday, but ended up making an eight on the fifth hole and losing the tournament by one shot. (Skip to 2:05)

Playing in the Masters gets the best of players. The pressure of winning a green jacket is daunting and causes players to make odd mistakes. Scott Hoch falls into this category. Hoch had a two-foot putt to win the Masters in 1989, but missed it and essentially handed the green jacket to Nick Faldo.

Unfortunately for Hunter Mahan, he managed to make this list not once, but twice. At the 2012 WGC-Accenture Match Play Championship, Mahan hit a ‘hosel-rocket’ shank on the fifth hole, leading 2-up in the semifinals. Mahan may have fell victim to ‘broadcaster’s jinx’, when the commentator coincidentally said Mahan had “arguably the best week of anybody up to this point.”

Every one has one of these moments on the golf course, even the best in the world. The only difference is, when it happens to these guys, millions of people see it.