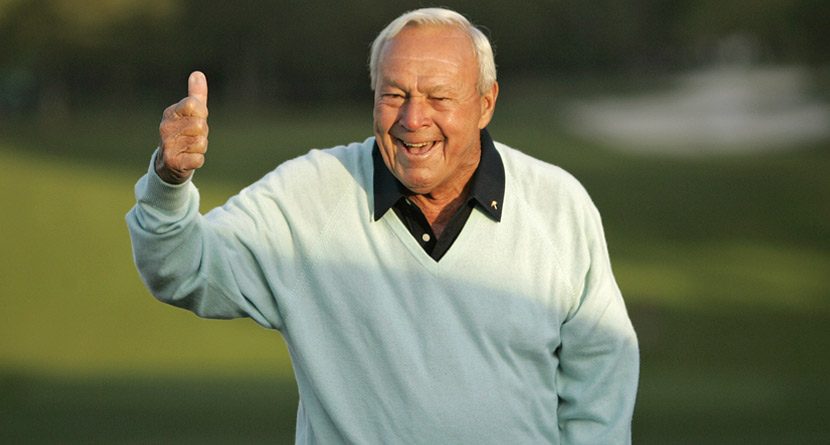 Arnold Palmer turns 85 on Wednesday and since we at the Back9Network simply adore this golf legend, we’re celebrating the King. With most of those years spent in and around the game of golf, there are dozens of reasons to love Arnie. Here are our top 9:

His nickname is “The King” – First and foremost, Arnie might have the best nickname in all of sports by being the original “King” (sorry LeBron James). He has his own Army – You know you’ve reached “baller status” when you have a legion of fans who call themselves your “army”. Arnie started this trend back in the 1950’s as thousands of loyal fans walked along side their hero for every hole of his legendary career. In addition to being a cool nickname for fans, Arnie’s Army has also grown into one of the biggest charities in the United States, which allows the golfing legend to give back to the people who supported him over his career. The organization is slated to focus on education and supporting the well-being of children across the nation.

He has his own Beverage – Chances are you’ve had a drink comprised of half lemonade and half iced tea at some point in your life. If so, then you’ve had an “Arnold Palmer”, duly named after the golfer’s favorite summertime drink. Just don’t add any vodka to the mix, because then you’ve got yourself a John Daly. Seriously.

He gets dates with Kate Upton – As if we needed another reason to be jealous of Arnie, he’s also been seen rubbing elbows with supermodel Kate Upton on and off the golf course. He even gave the gorgeous newbie golfer a lesson. Remember Kate: it’s all in the hips. He’s awesome in commercials – Arnie is also one of the better pro golfers to appear in a television commercial. He definitely appears comfortable in front of a camera, specifically in the USGA’s “While We’re Young” ad campaigns to speed up slow play.

He appeared in the new Tiger Woods PGA Tour video game – What better way to honor The King than to play as him in video game form? Arnie appeared alongside modern-day golf legend Tiger Woods for the latter’s EA Sports franchise.

His golf swing is truly unique – To say that Arnie has the perfect golf swing would be a bit of a stretch. He pays no mind to swing mechanics with his action, which can be best compared to swatting at a hornet’s nest while wearing a blindfold. He’s made it work for decades, of course.

He beat cancer – Last but certainly not least, Arnie proved how tough he was by beating prostate cancer in 1997. Nothing can keep The King down. Nothing.