9 Surprising Secrets About the Masters 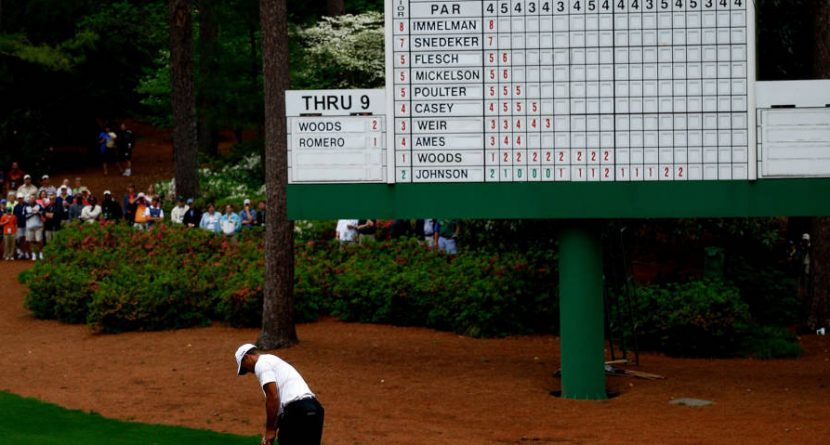 Here are 9 things you may not know about the Masters:

Lately it seems like every golf course has branded a set of signature holes, from the “Bear Trap” at PGA National to the “Snake Pit” at Innisbrook. But the original is Amen Corner, the name for holes 11 through 13 at Augusta National. Surprisingly, though, the name isn’t that old: it was coined by sportswriter Herbert Warren Wind in 1958 and didn’t immediately catch on. That means that for more than 25 years of the tournament, the world’s most famous stretch of holes were best known as just “the 11th, 12th and 13th.”

8. The Crow’s Nest isn’t that nice

Sure, it’s an incredible honor to stay in the Crow’s Nest during Masters week-you have to have won the U.S. Amateur or another elite amateur tournament-but it’s no presidential suite. This apartment-style dwelling at the top of the clubhouse is more dorm room than luxury villa, with shared living space and bedrooms that lack floor-to-ceiling walls. With all the college players who’ve stayed here, it’s amazing that no one has brought a young lady back and pulled the whole “sock on the doorknob” routine, leaving the other amateurs to sleep out on the first teebox.

7. Augusta is a trendsetter

With a tight rein on tradition and seemingly never-ending controversy about its membership policies, Augusta National is an unlikely place to be on the cutting edge. But the truth is, the Masters is responsible for several of the innovations that golf tournaments still use today. The Masters was the first 72-hole stroke play event to be held over four days (now a professional standard) and the first to report scores on the over/under par system we now see on TV every weekend. Now if only the other tournaments would follow Augusta’s lead on dirt-cheap concession prices.

In the 1950s, Augusta liked Ike-and the feeling was mutual. In fact, President Eisenhower visited so frequently that the club built him the eponymous Eisenhower Cabin just 200 feet from the main clubhouse, providing a home-away-from-home for the Commander in Chief. The construction of the house reportedly followed Secret Service security guidelines and even hosted President Reagan in 1981.

5. Green Jackets have to stay on the grounds-unless you’re Gary Player

When you imagine yourself winning a Green Jacket, you probably see yourself wearing it for years-lounging around the house, laughing with friends as you sip on eggnog during a holiday party, maybe even getting your driver’s license picture taken in it. But technically, each champion can only take his Green Jacket home for a year; afterwards it has to remain on club property. That is, unless you’re Gary Player, who won in 1961, 1974 and 1978. He took his jacket back to South Africa and has refused to return it, despite several chairmen asking him “pretty please.”

4. The clubhouse has another name

The clubhouse you see on TV every year-also immortalized in miniature as the Master’s trophy-was originally called the Dennis Rodman house. Wait, that’s not right. It’s the Dennis Redmond house, named after the original homeowner who built it in 1854 as his plantation home. Bonus fact: Rae’s Creek, probably the most famous water hazard in all of golf, was named after settler John Rae, who lived along the creek starting in 1765. Ironically, Rae hated when kids would play sports on his lawn.

3. The course is a glorified cow pasture (or at least it used to be)

These days you’ll hear shouts of “Tiger!” echo off the pine trees at Augusta National, but in the 1940s you were more likely to hear people grumbling about all the cows. Forced to shut down for two years during World War II, the club tried to pull in some money by raising turkeys and cattle on the property. The disappointing revenue taught the club two things: the land is better off as a golf course, and there’s a lot more profit in pimento cheese sandwiches than in turkeys.

During course construction, Augusta National co-founder Bobby Jones wanted to build a 19th hole-and it had nothing to do with chugging Miller Lites with his buddies. Jones proposed building an actual extra hole, a short par-3 that would help settle bets from casual rounds. The plan never came to fruition, although between his fame and taste for whiskey, an unofficial 19th hole probably sprung up wherever he went.

1. A tragic death haunts the property

Bobby Jones gets a lot of press, but less is said about his counterpart, club co-founder Clifford Roberts. That might be because of Roberts’ horrific death that occurred on the property: suffering from poor health, he shot himself on the club’s Par 3 course in 1978. With the Par 3 course now serving as the site of a playful, family-friendly exhibition, I have a feeling this won’t be mentioned on this year’s broadcast.