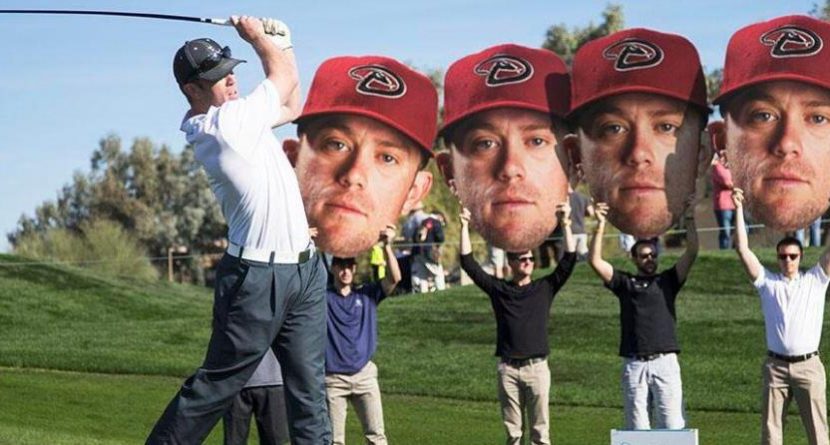 Aaron Hill is a second baseman for the Arizona Diamondbacks. The nine-year veteran was an All-Star in 2009 and a Silver Slugger in ’09 and 2012, but he’s not among the bigger names in baseball.

Fans at the Waste Management Phoenix Open were connecting his name with his face on Wednesday, though. Because they saw plenty of his face – four Fathead faces to be exact.

Hill took part in the pro-am with pro Billy Horschel, and their group was followed around by Diamondbacks teammates Charles Brewer, Eric Chavez, Josh Collmenter and Patrick Corbin, who each held aloft Hill’s pretty face everywhere their teammate went.

In that video, you saw Horschel crush a ball through one of Hill’s faces. That shot went through the drawn-on nose ring, and Hill followed up by sending one through his lip:

That hole in Aaron Hill’s mouth is where he hit it through the board on 18 tee pic.twitter.com/QIGEd1jHBh

“We were thinking about bringing signs,” Collmenter told NESN. “We were just going to make a big sign that said, ‘King of the Hill,’ or maybe a quote from ‘Happy Gilmore’ or something. And then we threw around the idea of the big heads. I was looking into getting them, and the D-Backs said, ‘Oh, we can have somebody make them,’ so they made them and got them for us. I didn’t realize they were going to be as enormous as they are.” Related Links: 5 Things You Need to Know About the Phoenix Open