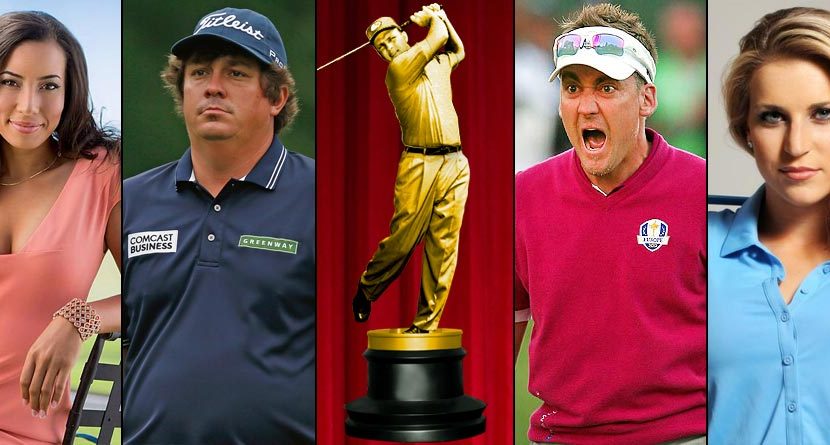 It’s that time of year again: Oscar season! When the best and brightest in Hollywood get together to pat each other on the back and laugh heartily at scripted jokes that aren’t really that funny. All this hoopla about the best in the business got us thinking — golf could really use its own version of the Oscars… The Arnies. Obviously, there has to be different categories from those at the Academy Awards. So instead of honoring a Best Picture or Best Director, we decided to focus on some of the under-appreciated categories. The Arnies will stand to honor the best in social media, the best singular performances, and the best moments from the previous year in the world of golf.

It is with the greatest honor that Back9Network presents the inaugural Arnie Awards:

Best Instagram Account: Meghan Hardin
Most people know Meghan Hardin from Golf Channel’s “The Big Break,” but Hardin is also a Wilson staff player and has her own calendar out. Since you can’t purchase it in stores, most people have found their way to her Instagram account, which is filled with behind-the-scenes pics from the shoot, as well as photos from the calendar itself. Hardin is turning into quite the social media maven and that’s why she takes home the inaugural Arnie for Best Instagram Account.

Best Twitter Account: Ian Poulter
If anyone knows how Twitter works, it’s Ian Poulter. The Englishman is famous for his “Chive” tweets, Twitter battles with trolls and other blockheads, and for interesting commentary on whatever Arsenal is up to. No matter how you slice it, Poulter is an absolute must-follow and that’s why he walks away with the Arnie for Best Twitter Account.

Best Twitter Trend: Dufnering
Much like any great screen play, a great Twitter trend usually takes more than one mind. It takes an actor (Jason Dufner) and an instigator (Keegan Bradley) to really get the ball rolling. When Bradley got his hands on the pic of Jason “Dufnering” for the first time in that school, he ran with it, creating an internet craze. If it were possible, they would’ve broke Twitter. Everyone who has ever heard of golf was taking pics of themselves in the immortal pose. Creating a nation-sweeping craze certainly deserves some praise and that’s why Jason Dufner and Keegan Bradley take home the Arnie for Best Twitter Trend.

Best Photo Bomb: Jason Dufner Re-Adjusting
Jason Dufner had a monster 2013 and is cleaning up at the Arnies, too. Everyone knows the Duf Daddy has a style all his own as he showed throughout the year with his crazy hair and “chill” demeanor. We also know he has excellent comedic timing — be it on purpose or not, thanks to this awesome photo bomb. Dufner’s perfect timing earns him the first Arnie for Best Photo Bomb. Best Outfit: John Daly Sponge Bob Pants
The competition in this category was quite stiff but at the end of the day, it’s hard to pick against John Daly. In a pro-am round in Qatar, Daly sported Sponge Bob Square Pants… pants. Poulter may have his tartans and Rickie Fowler his signature Sunday orange, but you can’t beat Sponge Bob and that’s why John Daly picks up the Arnie for Best Outfit. Best Shot: Jordan Spieth chips in to force playoff/Charl Schwartzel off the road and over the trees
While there were a lot of shots to choose from in the past year, these two were the most memorable. And yes, there has been a tie at the Academy Awards so there’s no shame in handing out two Arnies on this occasion. (FYI: The last tie at the Academy Awards was in 1995 in the Best Short Film Category.) First of all, we all know the year Jordan Spieth had and it could be said it wouldn’t have happened had he not chipped in to force a playoff with Zach Johnson at the John Deere Classic. He went on to become the youngest player to win on tour in nearly half a century.

Meanwhile, Schwartzel pulled off a shot at the Volvo Golf Champions that nearly all of us have tried and failed miserably in doing so. Any amateur who’s had a blind shot over trees knows it’s next to impossible to correctly judge distance and direction. We’re usually happy just finding the fringe along the green, let alone hitting it to less than a foot like Schawartzel did. Thanks to their efforts, Spieth can add an Arnie to his hardware collection and Schwartzel can display his just in front of that green jacket thing he owns.

Best Breakout Performance: Cheyenne Woods Wins Women’s Aussie Masters
Sometimes, the hardest thing is following in the footsteps of greatness. Cheyenne Woods has long been a talented golfer but because of her last name, the pressure to perform on the biggest stage has loomed large. Woods claimed her first professional victory in the Australian Women’s Masters in early February to silence all her critics. The win was a major step in carving out a winning legacy of her own and that’s why Cheyenne Woods takes home the hardware for Best Breakout Performance.

Best Caddie: Katharina Boehm
It’s hard to beat batting 1.000 and that’s exactly what Katharina Boehm, Sergio Garcia’s girlfriend, is doing for her looping career. Boehm caddied for Garcia when he won the Thailand Golf Championship late last year, then threw in the bib before the next tournament. Sergio noted at the time, “She has a good winning percentage at the moment.” Boehm helped Sergio collect his first win since December 2012 and, we can imagine, had some say in his club choice on the hole-in-one he made that week. Her winning percentage and wisdom to go out on top is why Katharina Boehm takes home the Arnie for Best Caddie. And that concludes the first annual Arnie Awards. Remember to tip the valet, spay and neuter your pets, yada, yada, yada. We’ll see you next year for the second installment of the Arnies, and until then, may your drives be straight and your tales be tall.