Best Week Ever? Pro Makes Ace, Wins & So Does His Fiancee 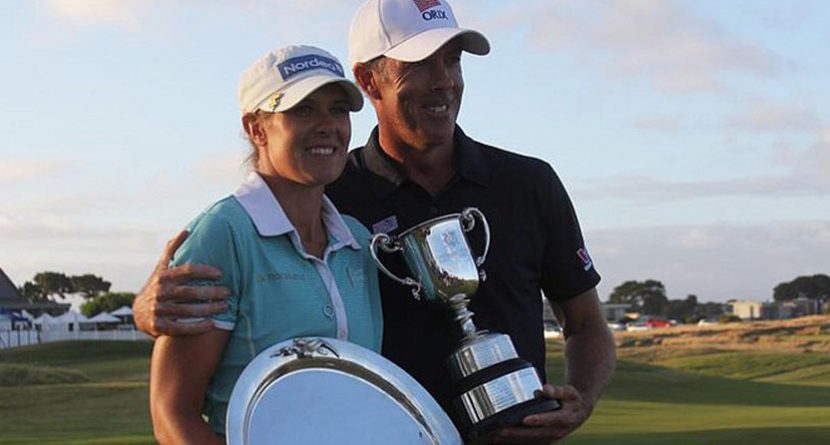 The best week of my life happened in 2007. I returned home from Paris on Saturday, saw the Police twice, Dave Matthews Band once, went to two Red Sox games and left for Bermuda on Sunday. It was awesome.

But, I think I’d trade it for the week that Aussie Richard Green just experienced.

If the name rings a bell, that’s probably because you heard it on Wednesday, after he made arguably the luckiest ace in the history of aces:

On Sunday, his week got even better when he won the Australian Tour’s Oates Victorian Open at Thirteenth Beach Country Club after outlasting Nick Cullen in a sudden-death playoff.

“It’s been a long time coming, I have wanted to come back to win and support the tournament,” Green said after his victory. “Finally, after 23 years of trying, I have got it finally.”

Related Links: Is This The Luckiest Hole-In-One Ever? | 6-Year-Old Makes Two Aces In Same Round

Hell of a week, right? Well it gets better…

While Green was busy preparing for his playoff, his fiancee, Marianne Skarpnord, was busy winning the Women’s Oates Victorian Open on the same course.

“It’s almost a dream come true – a fairytale,” Skarpnord said. “We got engaged last week, we moved into the house on Monday, Greeny had an albatross on Wednesday and here we are today both winners.”

Also of note, the house they moved into on Monday is on the course they just won at. Quite a week, indeed.

”I really think it’s fascinating that we’ve both done it,” Green said. “Especially with Marianne winning, experiencing her thoughts and feelings on the week at night and talking to each other about it has been very different.”