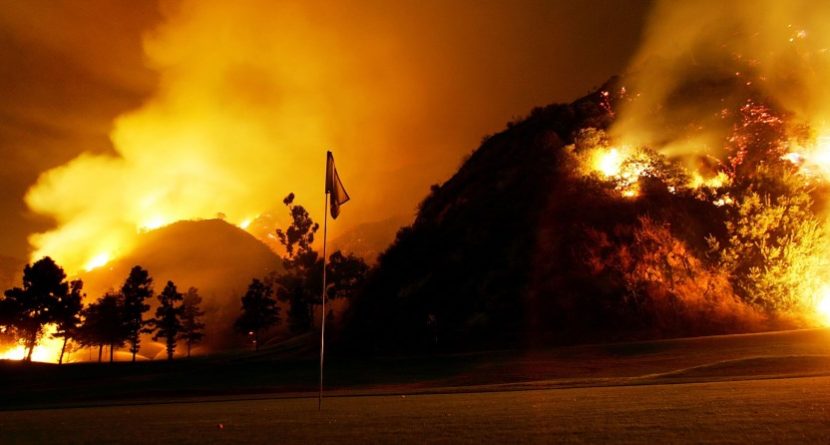 The next time you and your titanium clubs play a round on a dry golf course and you find your ball next to or on top of a rock, just take relief and move your ball. Fire authorities are giving you permission.

According to a report from the University of California-Irvine, titanium-coated clubs may have been the reason for two fires that broke out in recent years on Southern California courses. The study confirmed that sparks created from such clubs striking rocks can cause vegetation along a course to catch fire.

The Orange County Fire Authority has long thought that titanium alloy golf clubs caused a fire in 2010 that burned 25 acres at the Shady Canyon Golf Club in Irvine, as well as a blaze that burned close to homes along the Arroyo Trabuco Golf Club in Mission Viejo. But the theory was laughed at – until now.

UCI scientists recreated the conditions at the golf courses on the days of the fires, then swung titanium clubs so that they contacted rocks. They discovered 3,000-degree sparks that burned for more than a second, which is more than enough time to spark flames in dry plants or leaves close by.

The scientists also conducted the same study – which featured high-speed cameras and electron microscopes – with standard stainless steel clubs. No such sparks were produced.

“The common denominator (for the fires) was each golfer used a titanium club, and hit the ball just out of bounds next to dry vegetation where the ground was extremely rocky,” said Orange County Fire Authority Capt. Steve Concialdi.

The new findings leave Concialdi and his fellow firefighters feeling justified after suggesting titanium clubs could start a fire.