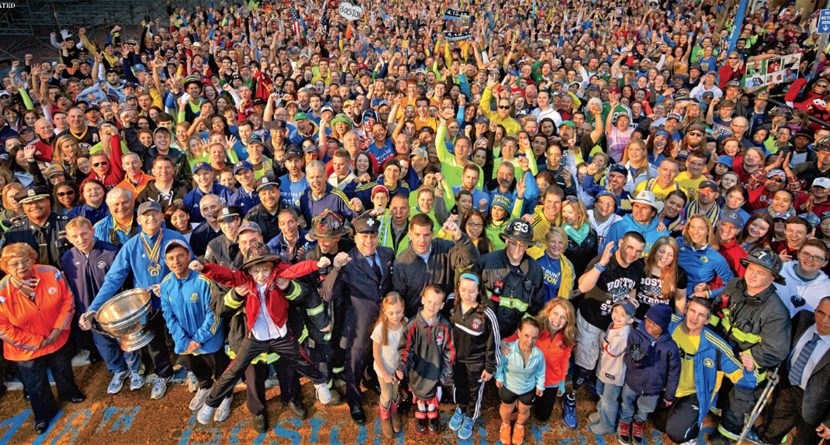 Just a year after the tragic Boston Marathon bombing, nearly 36,000 runners took part in Monday’s race, the second-largest field ever. Meb Keflezighi took home the men’s title with a time of 2:08:37, the first American man to win since 1983. On the women’s side, we saw a repeat. Rita Jeptoo of Kenya collected her second title in as many years, setting a women’s course record of 2:18:57.

Several golfers, including Gary Player and Rickie Fowler, showed their support for all those running in the marathon this year.

Congratulations to American Meb Keflezighi who has won the #BostonMarathon in a time of 2:08:37. Fantastic!!

Congratulations to Rita Jeptoo of Kenya who has won the #BostonMarathon again in a new course record time of 2:18:57. Wow!!

So cool to see so much support for some of the best sports fans, and people, in the country!! #BostonStrong #BostonMarathon #USA

My friend Eric Hilcoff is running the Boston Marathon for #Golf Fights Cancer. Wish him and everyone running Boston all the best.

First American since 1983 wins the @bostonmarathon! Congratulations to Meb Keflezighi who finished with a time of 2:08:37. #BostonStrong

On April 12, more than 3,000 enthusiastic Bostonians came together on the Boston Marathon finish line to show their “Boston Strong” for the cover of this week’s Sports Illustrated, on newsstands now: And here’s how they pulled it off:

Here’s a look back at Back9Network’s tribute to the tragedy that struck the great city of Boston just a year ago: