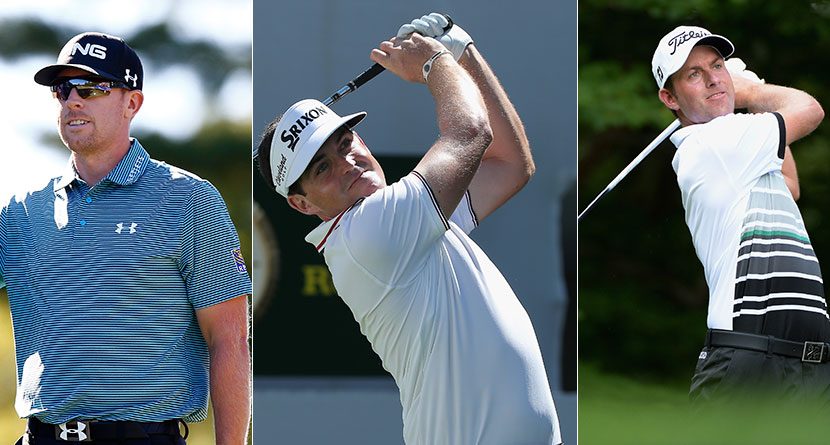 It’s a youthful squad with three players appearing in the biennial competition for the first time. And with the absence of annual Ryder Cup competitors Tiger Woods, Jason Dufner and Dustin Johnson, Team USA enters the event as the underdog against a European team that includes four of the top five players in the Official World Golf Rankings.

With team USA’s roster complete, we take an in-depth look at the team:

Keegan Bradley | Ryder Cup Experience: 2012 (3-1)
Bradley was a force in the 2012 Ryder Cup at Medinah and was a likely captain’s pick. After an up and down season, including six top 10s, Bradley picked up his play in the FedExCup and finished t-13 at the Deutsche Bank Championship. He’s a perfect pair with Phil Mickelson in team play and will be a key player for the U.S. at Gleneagles.

Rickie Fowler | Ryder Cup Experience: 2010 (0-1-2)
One of the game’s more popular players, Fowler has lived up to that hype with a stellar season. He’s the only player to finish inside the top five at all four major championships and while he hasn’t won an event this season, he’s logged a total of eight top fives. Fowler’s youth, energy and shotmaking will undoubtedly be a big piece to a U.S. upset.

Zach Johnson | Ryder Cup Experience: 2006, 2010, 2012 (6-4-1)
Johnson won in January at the Hyundai Tournament of Champions and has posted five other top 10s this season. This will be his fourth Ryder Cup and he’ll surely be hoping for a win as he’s been a part of three losing teams.

Matt Kuchar | Ryder Cup Experience: 2010, 2012 (3-2-2)
Kuchar won last at the RBC Heritage at Harbour Town and has been solid all year long. He’s turned in 11 top 10s and has 16 top-25 finishes this season. Kuchar will provide the inexperienced U.S. team with a calm and unflappable demeanor.

Hunter Mahan | Ryder Cup Experience: 2008, 2010 (3-2-3)
Mahan reasserted himself into the captain’s pick discussion last week with a victory at The Barclays. He went 2-0-3 in his Ryder Cup debut in 2008 but struggled in 2010, going 1-2 with an infamous duffed chip in a crucial singles match. He’ll surely hope to turn his — and the United States’ — Ryder Cup record around after earning one of three captain’s picks.

Patrick Reed | Ryder Cup Experience: Rookie
Reed burst onto the scene with three wins in the last 13 months. He won the 2013 Wyndham Championship before taking the Humana Challenge and WGC Cadillac Championship earlier this season. Reed has cooled off since but turned in a t-4 and t-9 at the Bridgestone Invitational and The Barclays, respectively.

Webb Simpson | Ryder Cup Experience: 2012 (2-2)
The 2012 U.S. Open champion, Simpson turned it on as of late and earned a t-9 Monday at the Deutsche Bank Championship. His short-game prowess and calm demeanor was surely a positive in the eyes of Watson, who took him with one of three captain’s picks. This year, Simpson has a victory and nine top-10 finishes.

Jordan Spieth | Ryder Cup Experience: Rookie
This will be Spieth’s first Ryder Cup but he gained a bit of international team competition experience last year at the Presidents Cup. Only 21 years old, Spieth was the 2013 PGA Tour Rookie of the Year and finished tied for second at the Masters in April.

Jimmy Walker | Ryder Cup Experience: Rookie
Walker has had a breakout season, compiling three victories and 10 top-10 finishes. He won the Frys.com Open and would win two more times — Sony Open and AT&T Pebble Beach National Pro-Am — before the tour swung back east. A t-7 at the PGA Championship and t-9 finish this past weekend at the Deutsche Bank Championship makes us expect big things from Walker at Gleneagles.

Bubba Watson | Ryder Cup Experience: 2010, 2012 (5-5-1)
How could we forget about Bubba? The bomber won the Northern Trust Open before claiming his second Masters title in April and has been solid all year long. With his length and passion for spirited play, look for Watson to help lead the charge for the Americans in Scotland.