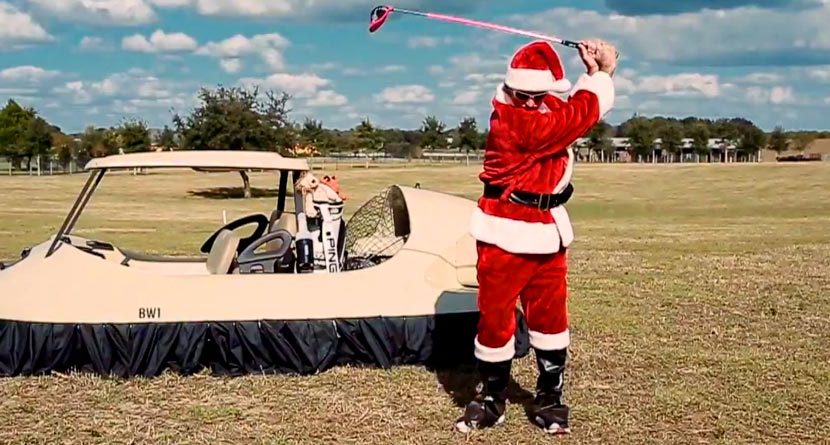 Over the past week or so, Bubba Watson has been bringing Christmas cheer to all of his Twitter followers. In addition to creating catchy rap jingles, he shares a new #Bubbaclaus contest everyday, asking his ‘Tweeps’ to share things such as the candle they’d invent for Christmas and their favorite joke for the holidays.

The winner of the ‘best joke’ contest took home some sweet goods from the Ryder Cup, as well as Oakley and PING gear.

Here’s the winning joke, just try not to laugh too hard.

It’s a good one… RT “@stevesloboda: What do u call a birdie putt on Christmas? A partridge on a par 3! #Bubbaclaus pic.twitter.com/nU9xDHN9fF”

As you’d assume, Watson received numerous submissions from his massive list of 1.2 million followers. Some were good, others were … not.

If you’re interested to know some of the other jokes, we’re here to help. Enjoy.

@bubbawatson what is green, white and red all over? A sun-burnt Bubbaclaus on Sunday at Augusta. #Bubbaclaus

@bubbawatson What do you call people who are afraid of Santa? CLAUStrophobic! #bubbaclaus

@bubbawatson how much did santa’s sleigh cost? Nothing, it was on the house.

@bubbawatson why don’t you have Santa cook for you?? Because you don’t want Claus contamination!

@bubbawatson Why was Santa’s little helper depressed? Because he had low ELF esteem. #Bubbaclaus

@bubbawatson #Bubbaclaus what do you call an elf that sings? A wrapper!