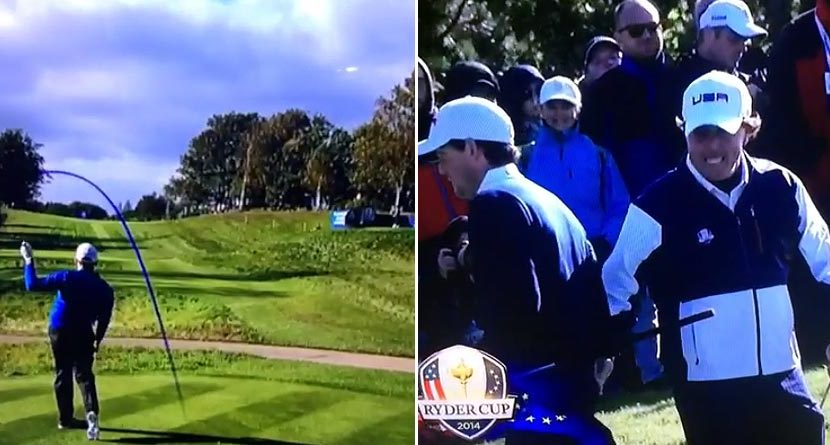 The 2014 Ryder Cup is in the books, closing out another wild weekend full of upsets, surprises, and some really good golf — if you’re a European fan. But it you weren’t fully paying attention to everything that happened you missed some great, and not so great, moments.

Here’s a roundup of the best ones as told by social media.

Here’s the scene that will be remembered for the next two years — by both sides:

Some slick moves from the Spaniard after his win over Jim Furyk Sunday:

New #TourSauce alert! Kuchar holes out for eagle and autographs the ball! https://t.co/Xv470gi8Vj

Patrick Reed was a center of attention Sunday, too. There was this on the first tee:

And then he did this, which will also likely be remembered for the next two years:

As soon as Europe had clinched its win, dejected U.S. fans looked towards 2016 and wondered who the U.S. captain would be:

Here’s the man of the day Saturday: Justin Rose:

Not sure who it’s for but nice little wink here from Rose. http://t.co/cEGseqIJgE

This is how it seemed things were going:

Perhaps Rose’s play was enough to make Rory do this:

Rose wasn’t the only one that played well, though:

The most unlikely #TourSauce ever from Kuchar https://t.co/sY2APjpW1X

Here’s a little more “tour sauce” for you:

Patrick Reed spraying #TourSauce all over the foothills of Scotland. So on board. https://t.co/rhOMsLMvtN

It wasn’t all good for Reed, though. Look at his caddie’s reaction:

Patrick Reed with the short miss on 16. Needed that one. http://t.co/Fofo6Dce87

And here’s the best one of Day 2, from our own Shane Bacon giving the U.S. a little suggestion for Sunday:

Hey Tom Watson, might I suggest these shirts for Sunday? pic.twitter.com/EAu86DoZxe

Kicking off Friday’s moments was Phil whiffing like Brady:

Michael Jordan is a little taller than Rickie Fowler. http://t.co/VPHRdTVqqk

The first of many butt slaps from these guys:

And whiffed on this high five:

But he did stick this approach when needed most:

Rickie Fowler hit the shot of the day: approach out of the rough to 10 feet.

And the PGA Tour had the perfect response:

And, we’ll end with fans at the Ryder Cup walking really, really fast: