By the Numbers: 2014 Open Championship 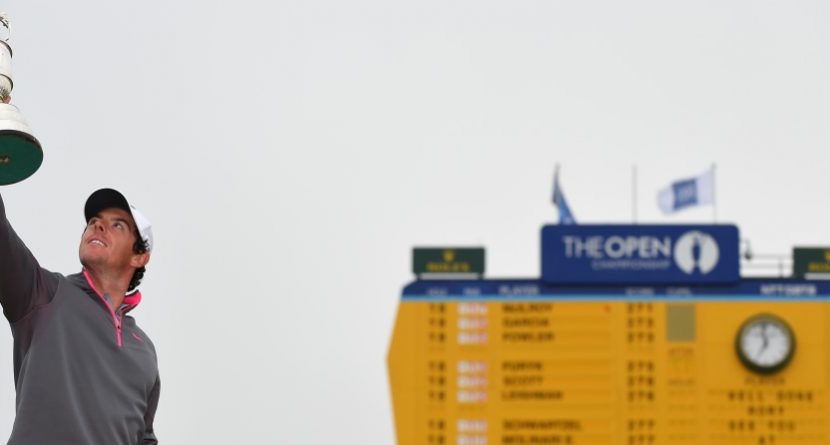 In wire-to-wire fashion, Rory McIlroy collected his third major on Sunday, winning the Open Championship at Royal Liverpool, the third leg of his career grand slam. With such an impressive victory there are bound to be some interesting numbers. Here they are:

17 – Strokes under par that McIlory finished, one shot lower than his 54-hole score. After going 66-66-68 in his first three rounds, he carded a 1-under 71 on Sunday to beat Rickie Fowler and Sergio Garcia by two strokes.

6 – Number of shots ahead McIlroy was entering Sunday. He also owned the lead going into the final round at his other two major wins: 2011 U.S. Open and 2012 PGA Championship.

263 – Days until the 2015 Masters, McIlroy’s first chance at completing the career grand slam.

16 – Number of golfers who have now won three of the four majors.

44 – Number of golfers who have now won three career majors. $341,730 – Amount that McIlroy’s father, Gerry, and three of his friends are expected to collect from a 500-to-1-odds bet they made 10 years ago that Rory would win the Open Championship before he turned 26.

1 – McIlroy’s new standing in the European Tour’s Race to Dubai. The Open Championship counts for points on both the European and PGA Tours.

11 – McIlroy’s new place in the FedExCup standings, up from 42nd.

81 – Number of starts for McIlroy on the PGA Tour. Tiger Woods also won the third leg of his career grand slam in his 81st PGA Tour start, but it was his 20th victory on the tour.

69 – Place that Woods finished Sunday, the worst result at a major of his professional career (aside from missed cuts).

19 – Number of majors that Woods has played since his 14th major championship, a drought of more than six years. Twenty-five majors have been played since the 2008 U.S. Open, but Woods has missed six due to injury. 3 – Number of top-five finishes in three majors this year for Fowler. He only had one before 2014. He’s the first player to earn top-10 results in the first three majors of a season since Woods in 2005.

62 – Number of major championship starts without a win for Garcia, second-most behind only Lee Westwood (64).

4 – Number of runner-up finishes at majors for Garcia.

0 – Number of top-10 finishes for defending Open champion Phil Mickelson, who tied for 23rd this week. Previously, he had never played the season’s third major with fewer than three such results already recorded.

4 – Number of players who shot a 7-under 65 on Sunday: Jim Furyk, Marc Leishman, Shane Lowry and Chris Wood. On Friday, Dustin Johnson also carded a 65, the lowest score of the tournament.