By the Numbers: Hyundai Tournament of Champions 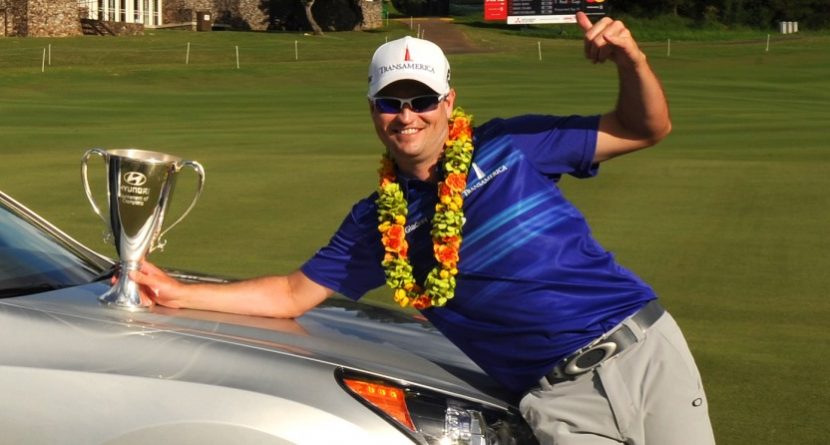 After shocking Tiger Woods a month ago in the final stateside tournament of 2013, Zach Johnson bounced back from a third-round 73 to close with a 7-under 66 on Monday, giving him the first event on U.S. soil in 2014.

Johnson won the Hyundai Tournament of Champions at Kapalua in Maui, Hawaii, by fending off 20-year-old sensation Jordan Spieth and watching the overnight leaders falter. Spieth, Webb Simpson and Dustin Johnson sat atop the leaderboard Sunday night at 14-under, but only Spieth could stay in the 60s on Monday. His 69 left him one shot off Johnson’s 19-under 273.

Here are some numbers from Maui:

11 – Number of career PGA Tour victories for Johnson, who’s now in his 11th year on tour.

48 – Combined total number of players in the field for Johnson’s win last month at the Northwestern Mutual World Challenge (18) and this week at Kapalua (30).

5th – Final place for Jason Dufner, the rabid Auburn fan who was surely thinking a bit about the Tigers’ BCS National Championship game Monday night. He was 5-under on the day until he double-bogeyed the 549-yard par-4 17th, which proved to be the toughest of the week. Dufner finished four shots off the lead at 15-under.

21st – Final place for Jonas Blixt, who was an All-American golfer at Florida State, the school which faced Auburn in the title game. There haven’t been any reports of trash talk between Dufner and Blixt, but the ball is in Blixt’s court…

34-31 – Final score of the BCS National Championship game, won by Florida State, which scored 21 points in the fourth quarter.

27 – Number of players in the field of 30 who finished the week under par. D.A. Points and John Merrick came in at an even-par 292, while 23-year-old Derek Ernst struggled to a 9-over-par 301. His 79 in the first round made it tough to rebound.