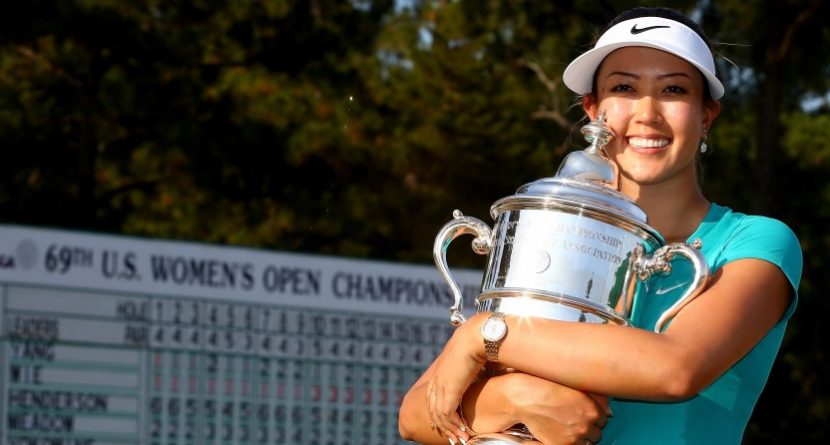 Pinehurst survived. Much was made about the U.S. Women’s Open teeing off only days after the men’s national championship on the same course. But Sunday played out just like a typical U.S. Open: the course was challenging and the elite golfers emerged.

Women’s superstar Michelle Wie carded an even-par 70 in the final round at Pinehurst No. 2, collecting the first major of her much-scrutinized career. Here’s a look at some of the numbers to come out of the 2014 U.S. Women’s Open:

2 – Strokes under par for Wie’s final score, and the number of shots making up her margin of victory over world No. 1 Stacy Lewis. Wie tallied 278 strokes after 2-under 68s on Thursday and Friday, and a 2-over 72 on Saturday that gave her a share of the lead entering Sunday, when she posted the steady 70.

1 – Number of players to finish the week under par. Wie was 2-under, Lewis finished even at 280, and Stephanie Meadow placed third at a 1-over 281. In fourth place was Amy Yang, who began the day tied with Wie atop the leaderboard and finished +2 overall.

3 – Wie’s lead in number of shots when she reached the par-4 16th hole, which she double-bogeyed. Her drive landed in a bunker, from which she aggressively chose to hit hybrid, and sailed into a native area. “I was kind of a dummy for not laying up when I was in that situation,” Wie said. Her ball was finally located after a three-minute search, she took a penalty stroke for an unplayable, chipped her ball to 35 feet from the cup, putted five feet past, then finally sank her sixth shot and avoided her first three-putt of the week.

25 – Distance in feet of Wie’s birdie putt on the par-3 17th, partially making up for the double on the previous hole. That gave her a two-shot edge as she stepped up for No. 18, on which she made par.

24 – Wie’s age in her ninth year as a professional.

16 – Wie’s age when she first contended at a U.S. Women’s Open. She tied for third at the 2006 event, which came after she had already placed in the top five at the season’s first two majors, the Kraft Nabisco Championship (T-3) and LPGA Championship (T-5). And that followed a 2005 season in which the 15-year-old amateur placed second at the LPGA Championship, tied for third at the Women’s British Open, and actually held a share of the 54-hole lead at the U.S. Open before carding a final-round 11-over 82.

11 – Number of top-10 finishes in majors for Wie, including her first title Sunday. Earlier this year she placed runner-up to Lexi Thompson in the Kraft Nabisco, the season’s first major. Thompson tied for seventh Sunday.

7 – New spot in the world rankings for Wie, who jumped four places with her win.

4 – Number of wins as a pro for Wie, two of which have come this season. She claimed the LPGA Lotte Championship in April, the 2010 CN Canadian Women’s Open, and 2009 Lorena Ochoa Invitational.

All buckled in!!!!! #safetyfirst @Kia pic.twitter.com/H8rLRaKJ5H

8 – Number of birdies posted by Lewis on Sunday, a final-round record for men and women in the U.S. Open. However, she also collected four bogeys and finished the day with a 4-under 66.

66 – Lowest round of the tournament, posted by Lewis and Catriona Matthew on Sunday, and by Juli Inkster on Saturday. Inkster, 53, was playing her 35th and final U.S. Women’s Open, and tied for 15th at +7. That’s the third-best finish ever at this event for a woman over 50 years of age.

78 – Scores posted on Thursday and Friday for Lucy Li, the 11-year-old who became the youngest qualifier in U.S. Women’s Open history. At 16-over-par, she missed the cut by seven strokes.

0 – Number of professional starts prior to the U.S. Women’s Open for Meadow, whose third-place finish comes after she just completed her collegiate career at the University of Alabama. The 22-year-old from Northern Ireland was the school’s first four-time first-team All-American.