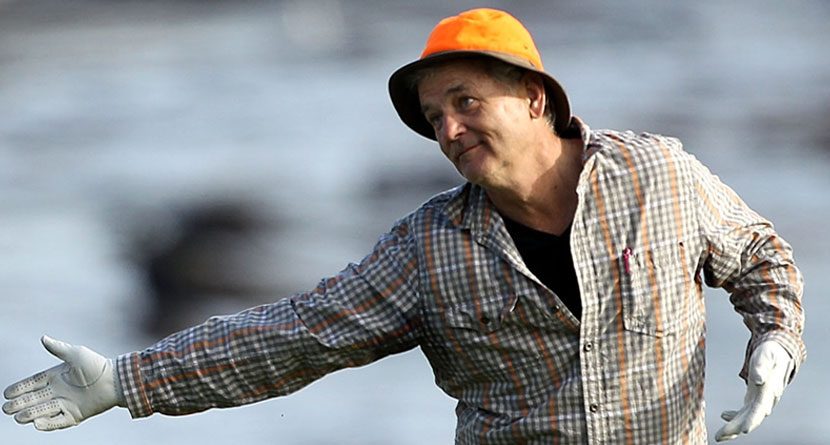 You may see a different face toting the golf bag of Adam Scott this week at the Sony Open in Hawaii. While the outspoken Steve Williams is usually the caddie for the reigning Masters champ, pro surfer Benji Weatherly will handle looping duties while Williams takes a break.

Celebrity or guest caddies are anything but unusual on the PGA Tour, as many notable names have carried the golf bag of different players over the years.

Bill Murray
Comedic legend Bill Murray once made multiple appearances as Scott Simpson’s caddie during the days of the Western Open at Cog Hill. Murray’s love of golf is well documented. Not only is he a regular at the AT&T Pebble Beach Pro-Am each year, it’s easy to argue that he is the single biggest draw for the galleries. On top of his play (he combined to with D.A. Points to win the event in 2011), Murray has also showed off his game on the silver screen in films like Lost in Translation and Space Jam. Simpson is a 7-time winner on the PGA Tour. Jon Gruden
It may have only been for seven holes following a rain delay, but the former Super Bowl-winning head coach and current NFL analyst can still say he looped for one of the game’s greatest characters, John Daly. Maybe not-so coincidentally, both men have ties to Hooters. What does this have to do with anything? Nothing really, just interesting. Daly missed the cut that week, but that doesn’t mean we don’t still love him. Sean Payton
New Orleans Saints coach Sean Payton caddied for PGA Tour pro Ryan Palmer last season at the Greenbrier Classic. Payton is a notorious golf nut, taking part in numerous pro-am events and charity tournaments each year. It’s not too hard to do a quick YouTube search and find some video of Coach taking his hacks on the links. Ted Scott and the New Orleans Saints made sure to capture the memorable moment via Twitter. Moore finished T-60 that week; no word whether or not he blames Payton’s yardages.

Great to see @SeanPayton caddying this week @GbrClassic. Maybe I’ll coach an NFL game. How hard can it be? #Saints pic.twitter.com/9l1uG1yYeS

The Masters Par-3 contest, which takes place every year prior to the season’s first major at Augusta National Golf Club, is a hotbed for celebrity loopers:

Andy Roddick
Tennis star Andy Roddick caddied for Zach Johnson in 2011, despite having never met one another prior to the round. Both players are major champions in their respective sports and both seem pretty easy to get along with. Roddick is a known golf-nut and pretty good player himself. It is a little odd that they just got thrown together before the round having never previously met. Heck, even Happy Gilmore (briefly) met his caddie before he hired him. Matt Ryan
Atlanta Falcons quarterback Matt Ryan carried for Stewart Cink in the 2012 par-3 contest. Ryan and Cink are known to play a round or two together here and there and according to Ryan, when Cink asked him if he’d “be willing to” caddy for him in the par-3, he was excited saying, “Are you crazy? Am I willing to do it? Of course I’ll do it!” Ryan also played a round at Augusta National, though his score isn’t readily known.

David Robinson
NBA legend David Robinson looped for Corey Pavin in 1997, creating the most unbalanced player-caddie duo in the history of height. In case you’re wondering, Robinson is listed at 7-foot-1-inch and Pavin stands (generously) at 5-9. Pavin and Robinson are reportedly such good friends that Robinson’s son, Corey, is named after Pavin. Denny Hamlin
Denny Hamlin caddied for his buddy Bubba Watson at the par-3 contest in 2012. Maybe Denny was Bubba’s good luck charm since he claimed Masters glory four days later. Along with being a 23-time winner in the NASCAR Sprint Cup series, he’s also an avid golfer. Hamlin has played in Tahoe as recently as last summer and spends his off-season in Phoenix playing as often as he can, often times with Bubba. Caroline Wozniacki
Of course, no one could forget 2013’s contest when Caroline “Future Mrs. McIlroy” Wozniacki caddied for her beau, Rory, could they? Wozniacki is one of the world’s top female tennis players but ever since hooking up with Mr. McIlroy, she’s been spotted plenty at the course and the driving range working on her game. The couple kicked off 2014 in style by getting engaged on New Year’s and it’s safe to assume she will be back on the bag for the par-3 in April. Related Link: By the Numbers – Tiger Woods vs. Jack Nicklaus