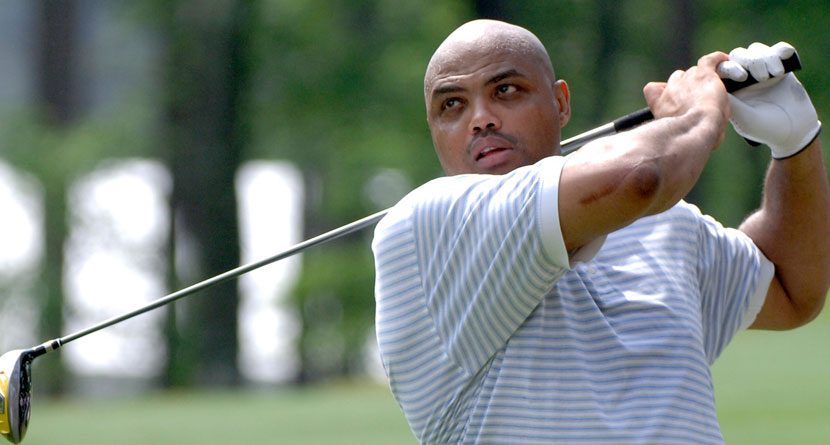 Sir Charles Barkley has one of the most unique golf swings on the planet and he’s not shy about putting it on display. After all, it’s probably easier to embrace his infamous stutter-swing and laugh about it, rather than try to change it.

Barkley was out on the course once again Wednesday, playing in the Regions Tradition Pro-Am at Shoal Creek with Fred Couples and Auburn men’s basketball head coach Bruce Pearl. The Regions Tradition tournament is one of five majors on the Champions Tour, which means Sir Charles is (kind of) playing in a major … but not really.

Barkley, of course, played basketball at Auburn University, so being paired with his alma mater’s new head coach gives the two plenty to talk about. It didn’t take long for Pearl and Barkley to start the trash talking, as it began on the very first tee box:

I don’t think teeing up his ball a few inches in front of the tee markers would give Barkley a huge advantage — given his golf history — but Pearl was not going to allow any cheating today.

Barkley would go on to play his round as the center of everyone’s attention (as expected), struggling to get the ball out of the rough several times.

After predicting earlier in the round that he would make three birdies on the day, Barkley felt comfortable he’d pull it off, even with only eight holes remaining.

“I’m just getting warmed up,” he said. “I didn’t get a chance to hit balls earlier.”

Barkley and Pearl weren’t the only notable stars on the course.

The 2013 Iron Bowl between Auburn and Alabama was one of the top college football games of the year, and the rivalry was taken to the golf course Wednesday. Both head coaches, Gus Malzahn and Nick Saban, played in the pro-am, although the two weren’t paired together. It’s probably a good thing after the way Auburn came out on top in that game.